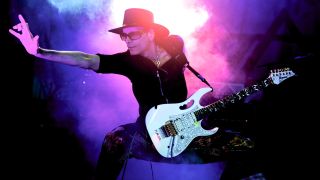 We look to Black Sabbath for many things, primary among them crushing, insanely heavy electric guitar riffs.

But according to Ozzy Osbourne, seven-string wizard and creator of the Ibanez PIA Steve Vai apparently heard something different in the band’s self-titled debut album.

“Steve Vai once said to me: ‘You know Black Sabbath’s first album is out of tune?’” Ozzy recalled in a recent interview with NME.

The Prince of Darkness’ response?

“I said: ‘You know what, Steve? It still sells! So what the fuck do you want?’

“Rock music is not supposed to sound perfect. If you want to hear perfect, go and watch a fucking symphony orchestra.”

Elsewhere in the article, Ozzy discussed working with Elton John on the title track to his new Ordinary Man album, and how even he was impressed by John’s appetite for excess.

“I remember Sharon taking me to a gig of his years ago, and his fucking dressing room was like a fucking bar with every known fucking spirit. Then he’d do seven gigs on the bounce,” Ozzy said.

“I’ve said to him: ‘How the fuck did you keep singing?’ If I even thought about cocaine my singing would go out the fucking window.”