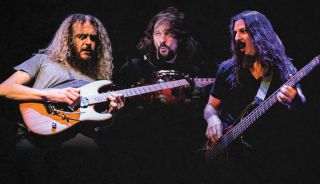 The Aristocrats have announced the first ever "Aristocamp."

A three-day music camp for guitarists, bassists, drummers and fans, the Aristocamp will take place from June 18-June 21 in upstate New York. The camp will also feature the world premiere of new material currently being recorded by the band.

“We’ve each been involved in music camps in the past and the highlight has always been interacting with the passionate musicians and music fans in attendance," the band said in a statement. "Between us we have a lifetime of performing, touring and recording experience to pass on and this is the perfect environment to do that. Also, this time we'll have the additional luxury of being able to zoom in on how we create our own music, and what happens when we interact as a band and play it live. We might even say it's ok to break the rules now and then."

The event will be organized by Music Masters Camps, and will be held at the Full Moon Resort, located a half hour west of Woodstock, NY.

Tickets and more info can be found at aristocamp.com.