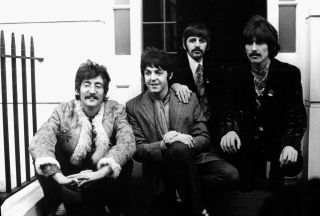 For 50 years it has been accepted as fact that, following the tense sessions for Let It Be, the Beatles recorded Abbey Road as their swan song and then proceeded to break up.

But a newly unearthed recording from September 8, 1969 – two weeks before the release of Abbey Road – challenges that piece of history.

The three address drummer Ringo Starr, hospitalized at the time with an intestinal issue, as well as bicker with each other regarding song contributions.

“Ringo – you can’t be here, but this is so you can hear what we’re discussing,” Lennon says into a portable tape recorder.

Lennon then proposes a formula for their next album – that he, Harrison and McCartney bring in four songs each, and Ringo contribute two, “if he wants them.”

McCartney, for his part, takes issue with Lennon’s proposal with a pointed shot at Harrison. “I thought until this album that George’s songs weren’t that good,” he says.

To which Harrison replies, “That’s a matter of taste. All down the line, people have liked my songs.”

Lennon then turns the tables on McCartney, telling him that none of his bandmates “dug” the Abbey Road track Maxwell’s Silver Hammer.

“I recorded it because I liked it,” McCartney retorts.

Lennon also suggests that the “Lennon-and-McCartney myth” should be laid to rest, and the two songwriters be credited individually for their compositions.

Lewisohn, who has written several celebrated Beatles books, uses the unearthed audio in his upcoming Hornsey Road, which examines the band’s final days.

“It’s a revelation,” Lewisohn told the Guardian about the audio. “The books have always told us that they knew Abbey Road was their last album and they wanted to go out on an artistic high. But no – they’re discussing the next album. And you think that John is the one who wanted to break them up but, when you hear this, he isn’t. Doesn’t that rewrite pretty much everything we thought we knew?”

The Beatles will celebrate the 50th anniversary of Abbey Road with a slew of new offerings in various formats to be released September 27 via Apple Corps Ltd./Capitol/UMe.