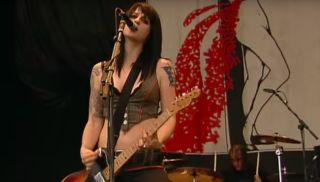 After returning with their first new song in 15 years, “Man vs. Magnet,” in September, L.A. punk rockers the Distillers have announced a 2019 U.S. tour. The 12-date outing kicks off May 19 in Columbus, Ohio and wraps June 4 in Nashville. Support will come from Starcrawler.

Tickets for all shows are on sale February 14.

Led by singer and guitarist Brody Dalle, the Distillers broke up in 2006, after which Dalle formed Spinerrette with Distillers guitarist Tony Bevilacqua, former Red Hot Chili Peppers and Pearl Jam drummer Jack Irons and Alain Johannes of Eleven, Them Crooked Vultures and Queens of the Stone Age. They released a self-titled album in 2009. Dalle also issued a solo effort, Diploid Love, in 2014.

“Man vs. Magnet” was the Distillers’ first music since 2003’s Coral Fang. The B-side to “Man vs. Magnet,” a track titled “Blood in Gutters,” was originally released as a solo single by Dalle in 2014.