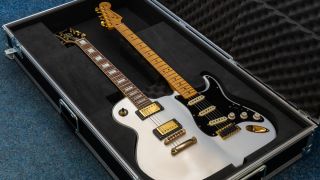 Here at Guitar World, we’re always game for checking out bizarre electric guitar builds, and as of late we’ve had the pleasure of digging up impressive one-offs like a Jazzmaster with a built-in tape delay effect and an Epiphone Les Paul with an onboard joystick-controlled fuzz pedal.

Now, we’re proud to introduce you, dear reader, to the Les-o-caster, a Les Paul/Strat hybrid (‘natch) created by Call of the Kraken guitarist and PMT Birmingham guitar specialist Conrad Snook.

Snook used a 2011 Fender MIM Stratocaster Standard and a copy of a Zakk Wylde custom Bullseye Les Paul for the build, replacing the Strat pickups with a set of Bareknuckle Mother's Milk single coils, and loading the Les with a boutique PAF set from Gemini Pickups - you can see it in action in the band's new single, My Head Keeps Spinning.

As for why Snook made such a guitar?

“I got the idea after sound checking at a music venue which had a bunch of guitars mounted on the walls in its bar area,” Snook told us.

“I think there was a Strat, Les Paul, Tele and Flying V,  but most notably, a Gibson EDS-1275 double neck. I remember looking at it and thinking that I liked the idea of having a double neck guitar, but how often would I use the 12-string during a gig? That was when the idea came to me: why not have a double-neck guitar that includes the two most common types of guitar?”

Read on for our exclusive conversation with Snook about how the Les-o-caster came to be.

Tell us about the Strat and Les Paul that you used for the build.

"The Strat half was a 2011 MIM standard. Knowing that I was going to chop it up and replace the pickups and wiring I just wanted any Strat that was very resonant and with a neck that felt great to me. I work in the UK's biggest guitar shop, so I've tried all the possibilities and I know what I like.

"The Les Paul half makes the whole thing a bit more interesting - It's a copy of a Zakk Wylde custom Bullseye with the maple neck. I quite like the fact of controversy around counterfeit guitars, and the truth of the matter is that I tried many different Les Pauls and I used the one that felt the best to me. I used all Fender and Gibson hardware as I wanted it all to be matching gold on both guitars."

What did the process involve?

"Once I had the two guitars, the first job involved removing the unwanted bits. This meant getting the handsaw out. Yes, the bodies were sawn by hand. This was a job for my dad as I knew that if I attempted the vital cuts the project wouldn't have looked half as good by the time it was finished.

"We used an inch-thick strip of mahogany between the bodies to help blend the arch top of the Les Paul smoothly into the flat Strat body. One more block of mahogany was used to compensate for the fact that the body lengths were slightly different, and the whole thing was glued together with six wooden dowel rods.

"A lot of time was spent rubbing it down and prepping it for paint while being respectful of the natural contours of the individual bodies. The body was sprayed white and finished with a subtle gold pearl effect by Toby at TDog Customs in Birmingham."

What challenges did you face while putting it together?

"The trickiest part was probably the wiring. The Strat pickup selector controls both sets of pickups and what was once the Les Paul pickup toggle is now used to switch between necks. When the toggle is in the middle, both necks are on!

How does the finished guitar play?

"Both necks feel great and the whole thing is very responsive. It was built with the purpose of being played live so I'm far from gentle with it. I've included handy features like locking tuners, graphite Strat saddles and a roller saddle bridge on the Les Paul.

"Within an evening of noodling I got used to going between the different scale lengths on each neck. The general size of the thing took a bit of getting used to but I can gig with it now without any issues.

"Being the only guitarist in my band Call of the Kraken, I have a lot of free rein to be as creative as I like with my parts. I enjoy the use of dynamics and tend to write clean chordal parts for verses but I like chunky choruses and heavy riffs and this guitar gives me the ability to have the most authentic tones for all of the parts I write."

Do you have any ideas for future double-neck mash-ups?

"Possibly. If I do another it would have to suit my songwriting style in the same way. Maybe an SG and a Telecaster would be fun?  Or an Explorer and a Jaguar perhaps? Either way, it would have to serve a purpose and be a functional gigging machine."