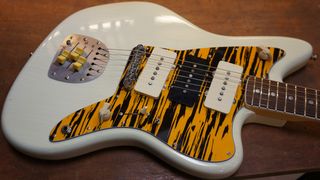 It’s always fun to build delay circuits into the bodies of Fender electric guitars – just ask Fender itself, which recently outfitted a rare Marauder design with the effect.

Now, UK-based shop Jack’s Instrument Services has performed a similar mod on another Fender offset model, a Jazzmaster, replacing the tremolo with a custom laser-cut tailpiece with a built-in tape delay effect.

According to shop head Jack Ellis (who also authors Total Guitar’s Fix Your Guitar column), the design “was conjured up from wanting more from a delay pedal. There's a lot to offer with delays, but it usually requires bending down to mess with the knobs.

“I thought, 'Let’s move this to a logical location that's easy to grab, so you can make tweaks on the fly! Particularly self-oscillating sound-on-sound tweaks.'”

As for how to do that?

“The task was threefold,” Ellis explains. “Rout timber from the guitar, create a new tailpiece and, most challenging, hack a delay pedal.”

The Jazzmaster, he continues, “is a decent candidate as it has a large pickguard and lots of control panels. But hacking the delay pedal was intricate and tough, as the delay was not made by hand and certainly not made to be altered. It took a bit of a fight to get it to submit to our ways.”

Submit it did, and that was only the beginning. In addition to the delay circuit, Ellis also modded the Jazzmaster with a trio of Creamery pickups controlled by a custom 10-way Freeway pickup selector switch, and added built-in passive Varitone and bass rolloff circuits.

And is he pleased with the finished product?

“Most certainly!" Ellis enthuses. "We achieved our objective in keeping the Jazzmaster looking mostly clean, with minimal disruption – at least on the surface – while adding some very, very fun features.”

For more information on Ellis and his creations, head to Jack’s Instrument Services.