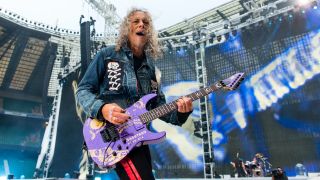 Ever wonder why Kirk Hammett wears tape across his right hand onstage? The internet certainly has.

While the Metallica electric guitar player has addressed the burning question over the years, he recently posted a clip on his Instagram in which he goes into his reasoning in detail.

“I’ve always plucked the strings really hard and banged on the guitar very hard when I’ve strummed or played or whatever,” he explained during an interview at the It's Alive! Classic Horror and Sci-Fi Art from the Kirk Hammett Collection exhibition.

“And over the years there’s these little lines that are on the side of my hand, and because of the bridge – a lot of it’s sharp angles – and just my style, they would break open and start bleeding.

“And when one of these lines would break open and start bleeding, if a guitar string got into that cut it was like the worst paper cut in the world. And so I started taping my hand just to prevent those cuts from happening.”

Hammett goes on to say that he used to wear white tape, but that it attracted too much attention.

“So I switched to transparent tape but it still attracts a lot of attention. Damn!” he laughs.

“But you know, sometimes I’ll jokingly say, ‘Oh, that’s my secret to all my technique.’”

Yet all the tape in the world couldn't save Hammett from his recent defeat at the hands of Mrs. Smith in the wah battle to end all wah battles. But his skills fared better in last week's acclaimed acoustic reworking of Metallica classic Blackened.