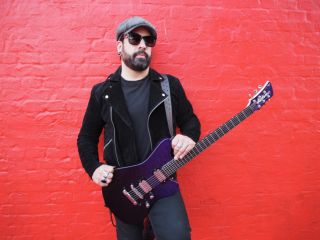 Jackson Guitars has announced that Volbeat guitarist Rob Caggiano has joined its artist roster. Caggiano’s signature model is scheduled to debut in early 2020, but in the meantime, he will be playing prototypes for Volbeat’s upcoming live dates on Slipknot’s Knotfest Roadshow and their own Rewind, Replay, Rebound world tour.

“I’m beyond thrilled and proud to be a part of the Jackson family,” said Caggiano, who has also played with Anthrax, in a statement. “Jackson guitars played a huge role for me in my formative years as a guitar player. Besides the fact that some of my favorite players growing up were also Jackson players—Randy Rhoads, Marty Friedman and Scott Ian to name a few, I fell in love with a quirky little guitar myself called the Jackson Outcaster in the mid Nineties. It quickly became my main guitar for a few years.”

He continued, “I was immediately drawn to the shape and the look of that guitar back then and I always felt that it stood out from the pack in a very cool way. It’s been somewhat of a recurring dream of mine over the years to actually revisit that shape and really make it my own. It’s very exciting for me to finally get that opportunity right now and to be working on this concept one-on-one with guys like Mike Shannon and ‘Red Dave’ Nichols and the entire Jackson Custom Shop team has been a dream come true for me in and of itself. These guys truly are wizards of the highest order, and I can’t wait for other guitar players to get their hands on this thing. Between the playability, the incredible looks and feel, and the killer tone it spits out— I’m really proud of what we’ve come up with so far.”

Caggiano also used the signature model to record his parts on Volbeat’s new album, Rewind, Replay, Rebound, due out August 2.