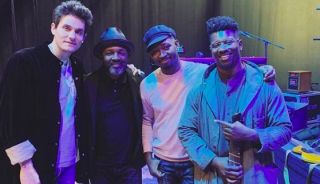 Animals as Leaders guitarist Tosin Abasi recently posted a short video to his Instagram of John Mayer jamming on one of his eight-string Abasi Concepts Larada models. You can check out Mayer’s impressive fingerstyle technique below.

Wrote Abasi, “How killing is John on the 8 string?!”

In 2017, Abasi talked to Guitar World about Abasi Guitars:

"I actually love designing guitars—so we want this to be an entire product line," he said. "From a creative standpoint, it’s fulfilling to collaborate with an amazing luthier and all the available materials and tech and to listen to our fan base and respond to consumer desires and produce what we think are really good answers to those needs. Moving forward, we’d like to have a whole line of guitars and signature artists as well."

Today did not suck! Got a chance to sit with @johnmayer and @sharkey335 at rehearsal. Incredibly genuine dudes and outlandishly musical players ( how killing is John on the 8 string?!😵) Looks like the Pathos and “Space Tele” will be in the hands of @sharkey335 from now on and we’re starting an art series build for John ASAP. Totally surreal 😩🤟🏿 @abasiconcepts @fishmanmusic @morganamps @gregkochmusic #johnmayersrigisbonkers #betterpedals #secretsauce Tosin Abasi