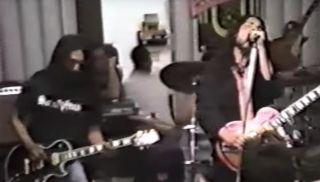 Soundgarden guitarist Kim Thayil was born on this day in 1960. In honor of his 58th birthday, check out this live video of Soundgarden performing a short set at Rhino Records Westwood in Los Angeles on September 24, 1989.

The Rhino appearance was staged to promote the recent release of Soundgarden’s major label debut album, Louder Than Love, which had been issued roughly three weeks earlier, on September 5, 1989. The performance captures the band’s brief lineup with former Nirvana guitarist Jason Everman, who joined following original Soundgarden bassist Hiro Yamomoto’s departure after the recording of Louder Than Love. Everman was then replaced by Ben Shepherd, who remained in the band—which in addition to Thayil included drummer Matt Cameron and late frontman Chris Cornell—for the rest of their initial run, as well as their more recent reunion album and tours.

For the Rhino gig, Soundgarden cranked through five Louder Than Love tracks—“Get on The Snake,” “Ugly Truth,” “Big Dumb Sex,” “Hands All Over” and “Gun”—before closing with “Beyond the Wheel,” from their 1988 effort, Ultramega OK.

Check out the full set below: