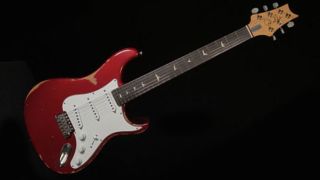 It’s fair to say no electric guitar in the past decade has been quite as controversial as John Mayer’s PRS Silver Sky - largely owing to its, ahem, familiarity - and it just got a little more divisive with the availability of a relic’d version.

Now, this isn’t an official PRS effort, rather the work of US retailer The Guitar Sanctuary, which has given a Horizon-finished model a custom aging job, promising “a more vintage vibe, feel, and tone” - although we’re not quite sure on that last one...

Obviously, the two-year-old Silver Sky hasn’t been around for nearly long enough to look like this of its own accord - and a relic’d PRS is a rare thing in itself, with owners tending to prefer mint condition for those luscious quilt tops.

On the bright side, the relic job only adds an additional $400 to the cost, bringing the grand total to $2,699. If a stock Silver Sky is just too pristine for you, take a closer look at The Guitar Sanctuary.