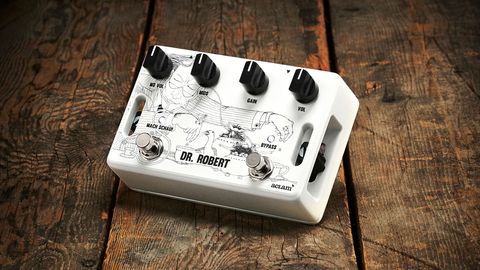 A versatile drive with a visceral power, and a must-have if you're looking to nail classic Beatles tones

When The Beatles’ Abbey Road album was being recorded, some 50 years ago, the band were mainly using Fender amps as can clearly be seen in their last live performance on Apple’s Savile Row rooftop on 30 January 1969.

Back in ’66 and ’67, though, Vox amps still figured heavily in the studio – not necessarily the AC30s of their earlier days but some new models that the British company supplied to the band. These were the UL 700 series of hybrid amps, which had a solid-state (transistor) preamp with valves in the output section and featured three-band EQ, built-in distortion (fuzz), tremolo and reverb.

Now rare and extremely expensive because not many were made before Vox moved over to a series of all solid-state amps, their distinctive tone found its way onto several Beatles recordings, notably certain tracks on the Revolver and Sgt Pepper’s Lonely Hearts Club Band albums.

While the Vox/Beatles connection may be a particular British phenomenon, it’s a Spanish company that is determined to preserve that heritage. Aclam Guitars, based in Barcelona, has released the Dr Robert pedal, named after one of the tracks on the Revolver album.

The pedal is designed to deliver an accurate emulation of a Vox UL 730 amp, the 30-watt version as opposed to the more powerful UL 7120 The Beatles also used. There are only a very small number of UL 730s still in existence, but Aclam owns one and has tuned the pedal’s circuitry to match it exactly while using an FET stage to reproduce the EL84-equipped power amp characteristics.

Attention to detail is taken even further with Revolver-style graphics by Klaus Voormann, bass-playing artist friend of The Beatles who designed the original album sleeve.

The basic sound of the pedal is dialled in with the Gain and Mids knob, which are very interactive. The pedal does actually have full three-band EQ like the original amp, but the treble and bass are adjusted by a pair of ‘set ’em and forget ’em’ internal trimmers because it’s the midrange that really sets the character of the sound.

In the original amp, the mid was separated from the rest of the tone stack, and that’s duplicated here in a control that offers a massive range: turn the knob clockwise and you add mids and saturation; turn it the other way and the sound cleans up as loads of midrange is scooped out.

At lower gain settings the pedal offers a clean sound with an enhanced treble bite while there’s plenty of extra juice via the Volume knob if you want to drive your amp. Turn up the gain and set the Mids accordingly and you can get into rich crunchy low- to medium-gain drive – perfect for Beatles rhythm tones driving songs such as Taxman and Doctor Robert, but also suitable for adding a frisson of spark and grit to any clean amp.

If you want more saturation, the Mach Schau! footswitch will provide it. “Mach Schau!” is what owner Bruno Koschmider shouted at the early Beatles when they played his Kaiserkeller club in Hamburg, urging them to ‘Put on a show!’ and take things up a gear, and the appropriately named switch can enable instant onstage rhythm-to-lead transitions.

It’s not just about channel switching, though, as the MS circuit makes a massive contribution to the pedal’s overall tonal capability by adding a fuzzy saturated element to the stew in tandem with the Mids and Gain knobs – think the Paperback Writer riff, which we had little difficulty mimicking using a ’67 Firebird III with P-90s (in place of the Epiphone Casino used on many Beatles sessions at the time) into a clean Fender amp, and the lead sounds from Sgt Pepper’s.

With everything max’d you get the sound of the fully cranked amp with plenty of sustain, demonstrating the breadth of the dirt spectrum on offer.

If you play in Sgt Pepper’s Phoney Pharts Pub Band or just have a yearning for mid-period Fabs tones, then this may be exactly what you need.

For everybody else, though, an obscure and largely forgotten amp gets rightly put back on the map in a versatile drive pedal with visceral power and a raw grind that will find a role in many kinds of music.