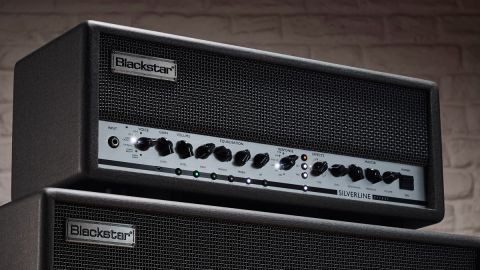 The Silverline range represents excellent value for money, with something for players at all levels to enjoy.

There seems to have been a renewed focus on digital amplification recently, as newer, more powerful signal processors arrive and amp manufacturers begin to see what they can do with them.

Unlike the electron valve, which stopped being developed in the 1940s, digital signal processing is on the cutting edge of modern technology for all kinds of applications, not just music, with competition between chip builders translating into continually improving performance and lower prices.

Equally adept with valve, analogue solid-state and digital disciplines, Blackstar has become a force to be reckoned with in the affordable digital-amp market and its new Silverline range features the latest fourth-generation Analog Devices SHARC processor.

The Silverline series has a unique look in Blackstar’s catalogue: a light-grey vinyl coat teamed with a black and silver sparkle grille cloth, and a small silver badge instead of the familiar moulded plastic logo.

The MDF cabinet surrounds a steel tray chassis, which contains the modular PCB electronics. The dimensions are typical for a compact valve head apart from the weight, which is less than expected because there are no valves and therefore no heavy transformers.

The Silverline has Blackstar’s familiar six-voice preamp, with two options each for clean, crunch and lead sounds.

Effects editing is easy, with three separate buttons for modulation, delay and reverb selection. There are four effects types in each of these categories.

The front-facing control panel is similar to Blackstar’s ID series, with a six-position rotary switch to choose the basic voice, followed by familiar controls for gain, volume, bass mid and treble. Not so familiar unless you’re already a Blackstar user is the ISF or Infinite Shape Feature control, which adds further tonal versatility by continuously varying the EQ stack from classic British to USA response.

It’s a unique Blackstar innovation that’s won the company a patent, and on the Silverline the ISF control sits next to another patented feature, the TVP (True Valve Power) response switch. This rotary selector provides six distinct responses based on the most popular valve output stages.

Next up are the Silverline’s digital effects, with three button switches and a knob to select the basic effects types, and an effects level control. Lastly, there are non-programmable master controls for presence, resonance and volume.

Around the back there’s a sparsely populated rear panel with a pair of speaker jacks, footswitch and MIDI sockets, and a speaker-emulated phones/line out jack together with an mp3/line in. These last two can be reconfigured in Blackstar’s Insider app to run as a series effects loop.

Rather than offer an impressionist’s repertoire of classic amplifiers from yesteryear, Blackstar’s Silverline features updated versions of the proprietary voices found on its ID series: Clean Warm and Clean Bright, Crunch and Super Crunch for light to medium drive sounds, and the well-known OD1 and OD2 lead voices.

Combining the regular EQ controls, ISF control, resonance, presence and the TVP response switch, there’s a lot of toneshaping flexibility. However, everything is arranged in an intuitive way, so it’s quick and easy to dial in the sounds you’re after.

The Silverline’s two clean sounds are good for all vintage and modern styles. Clean Bright has a little extra gain as well as a tighter bass and extended high range, which works really well with single coils, while Clean Warm is ideal for humbuckers.

Crunch and Super Crunch add extra gain and enhanced dynamics, which sound great for blues and classic rock, while OD1 and OD2 pile on gain and sustain for high-energy solos, with OD2’s mid-boosted tone working better for single coils.

The True Valve Power response switch emulates EL84, 6V6, EL34, KT66, 6L6 and KT88 power stages, with compression and drive progressively reducing as you travel up from the EL84 setting to the KT88, which has the biggest, most open sound.

The Silverline’s tones breathe and respond like a good valve amp, cleaning up as you back off with the pick or guitar volume control and increasing in bite and aggression as you dig in.

We used our regular Les Paul and Duncan Alnico Proloaded Strat alongside a Gibson Memphis ’63 ES-335 and found our favourite sounds using the four clean and crunch voices in combination with the EL84, 6V6 and 6L6 TVP settings.  This gave us a great selection of AC30-ish cleans and Tweed-inspired leads that covered everything from woody jazz tones to 70s classic rock.

For modern rock and metal, the OD1 and OD2 voices are ready and waiting with enough gain and sustain to make even the weediest of single coils sound like the axe of a rock god.

Unlike amps that use effects to mask less than great core sounds, the Silverline’s onboard effects are the cherry on top of a very tasty cake, including four choices each for modulation, delay and reverb, with all three effects types able to run simultaneously.

With 100 watts powering its Celestion V-Type-loaded 2x12 cabinet, the Silverline Deluxe has plenty of volume to handle any gig, as well as looking impressive on stage. It’s also a great studio companion, with a speaker-emulated line out and a USB socket for direct recording and reamping using Blackstar’s Insider app, which accesses the front panel controls and a few hidden functions, as well as being a storage library for your favourite patches.

Guitar amplification hangs on as one of the electron valve’s few remaining outposts. However, as time moves on we’re slowly but inexorably leaving the tube behind. The good news is we’ve arrived at the beginning of an exciting digital era, where the latest DSPs really can produce genuinely thrilling and affordable guitar tone, with none of the valve’s shortcomings.

The onboard effects are great, although the combination of modulations plus delays and reverbs might seem a little dull compared with some of the competition. It would be great to see some optional firmware updates with alternative effects bundles in the future.

This aside, the Silverline Deluxe 100-watt head with its matching 2x12 cab sounds mightily impressive – and should do as it’s the top of the shop. There’s also a thunderous 2x100-watt stereo combo and a compact 100-watt 1x12, together with 50- and 20-watt options at more affordable prices.