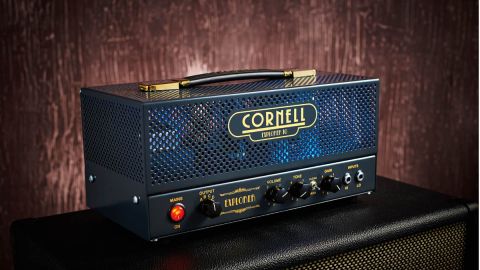 A classy Class A lunchbox head with switchable power, an immaculate, low-noise performance, and some truly magnificent tones.

Dennis Cornell is one of the legendary figures of British guitar amplification, with a history that goes way back to the early 1960s, when he worked for the Arbiter group.

Back then, Cornell was part of the team behind Sound City amplifiers and the original Fuzz Face effect, popularised by Jimi Hendrix, Jeff Beck and many other influential artists from that era.

Still active today, Dennis puts his name to modern amplifiers and pedals that are used by Eric Clapton, Noel Gallagher and many other top players who value the tank-like build quality and vintage vibe that Cornell is known for.

For this review we’re taking a look at a small but potent addition to the range, the all-new Cornell Explorer 10.

It’s a typical ‘lunchbox’ head – a format that’s become a popular seller for many builders – with a rugged grey-painted steel case and perforated cover set off by smart gold handle trims that match the gold-screened badge and lettering.

Despite compact dimensions, the Explorer 10 is reassuringly weighty because of its oversized mains and output transformers.

Behind the bottom cover plate, most of the electronics are hand-soldered onto a substantial and completely rigid 4.8mm thick circuit board, which combines printed tracks with turret and eyelet-style wiring.

This blend of techniques allows components to be laid out in a similar fashion to 1950s American amps when needed, preserving the often-overlooked subtle interactions that are part of many vintage valve circuits.

The main board also holds the base for the Explorer’s single 6L6 output valve, while the two 12AX7 preamplifier valve bases are chassis-mounted with hand-wired links. Component quality is first class, with expensive carbon comp resistors and exceptionally neat wiring.

The Explorer 10 has a simple single-channel preamp with volume, gain and tone rotary controls. There’s a switch called Clean/Mean, which adds a respectable midboost, and a four-way attenuator switch that controls the Explorer 10’s output power with four settings ranging from 10 watts down to just 1/8 of a watt.

Around the back, there’s a pair of loudspeaker outlets and an impedance switch with a choice of four- or eight-ohm loads, for easy connection to a wide range of cabinets.

A classy grey and gold colour scheme is set off by the gold found on the strap handle.

You can select between 10, two, 1/4 and 1/8-watt power levels with the attenuator switch.

The preamp has a Clean/Mean gain switch that flips from clean to a punchy midrange boost.

A quartet of blue LEDs light up the preamp valves when you switch on, which feels a little superfluous on such an uncompromisingly traditional amp, not least as the power switch is illuminated as well.

There’s no standby switch, but the Explorer 10 uses a clever thermistor arrangement to delay full current being applied to the mains transformer for a few seconds until the thermistor has warmed up. Overall, the Cornell is built to the kind of standard only a few manufacturers can match and should last a lifetime.

The Explorer 10 has a single-ended output stage that runs in pure Class A. This means there’s one output valve that amplifies 100 per cent of the time.

Class A is less efficient and can be harder on valves, too, but it’s supposed to provide a purer tone, with fewer odd harmonics, something that’s also supposed to be helped by carbon comp resistors adding a little more distortion under certain conditions.

Esoteric hi-fi mumbo-jumbo aside, it’s a fact that some of the biggest guitar tracks of all time have been recorded with small single-ended amps, so lower wattages are often a positive advantage in the studio.

We tried out the Explorer 10 with a 1x12 cab loaded with a Celestion Creamback and our usual guitars, including a Strat with regular output Duncan Alnico Pros, and a ’72 Les Paul Custom with the original embossed humbucking pickups.

The first thing we noticed was the almost complete lack of noise – there’s practically no hiss or hum, even at high-gain settings, making the Explorer 10 an ideal recording partner. Despite the simple control arrangement, there’s a surprisingly wide range of tones on offer depending on how you set the volume, tone and gain knobs.

The highs are sparkling without being shrill or piercing, making clean sounds a real joy to experiment with, from the velvety jazz of the Les Paul’s neck pickup to the quack of the Strat’s two- and four-pickup selector switch positions.

The overdrive sounds are equally rewarding, mixing Fender Tweed and Vox influences for a wide range of distortion effects that go from the subtlest of edges to a fully-cranked assault of filth, with the Clean/Mean switch providing a powerful midrange boost that’s perfect for beefing up single coils.

The attenuator control plays a key role here, making it possible to mix output stage and preamp distortion at any volume level. 10 watts might not sound a lot on paper, but plugged into a suitable cabinet the Explorer 10 can be loud enough to add plenty of in-room ambience to a microphone, as well as handling smaller gigs and rehearsals.

At the other end of the scale, the 1/8- watt setting is quiet enough to max out everything without fear of disturbing the neighbours, should inspiration strike you in the middle of the night.

Ever-changing and improving technology has given the modern guitar amplifier capabilities that would have been unthinkable just a decade ago.