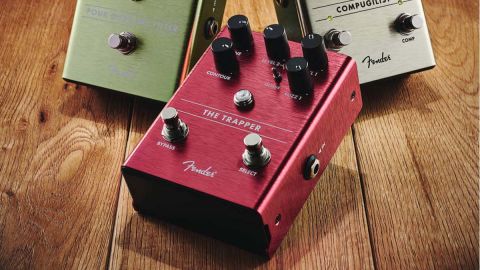 The Trapper is a dynamic, versatile fuzz, with two discrete core flavours – one a little more feral than the other – and an octave function that opens up a world of quasi-synth overtones. It's a lot of fun.

What’s better than a fuzz pedal? Answer: two fuzz pedals. The Trapper isn’t exactly that, but it does feature two different fuzz voices and lets you footswitch between the two.

Fuzz 1, which has Fuzz and Level controls, is a smooth everyday silicon fuzz that is also capable of octave fuzz via a toggle switch that adds in that extra harmonic element.

The second fuzz is more full-on hooligan, and while it only has a Level control it also has an integrated noise gate, the idea being that you use your guitar volume and tone controls to bring out its variations – back off your guitar volume for sputter and glitch.

Both circuits feed an EQ array consisting of a Tone knob that rolls off treble and a Contour knob that has bass boost/treble cut at one extreme and the opposite at the other, with scooped mids at its centre. Between the two knobs you can dial in loads of tonal variation, from thick and woolly to eardrum-shredding spikiness.