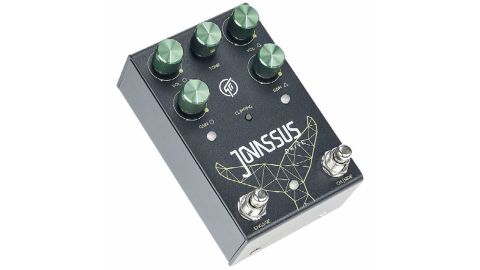 With an array of features including LED clipping, independent controls for each of its two channels and clickless footswitching, this stompbox carves out a niche unfilled by previous drive pedals.

Every time I think I’m perfectly content with my current guitar pedal signal chain, a glorious new stompbox comes along that derails my pedalboard happiness. Such was the case when I stumbled upon the GFI System Jonassus Drive.

Don’t get me wrong - I have enough overdrive and distortion pedals to last me well into the zombie apocalypse (because it’s coming), but the Jonassus was something different. Not overly Marshall, Fender or Vox in its low- to high-gain drive, or even Klon-like or Screamer-synonymous, but more that it had its own joie de vivre.

Without coming across as too hyperbolic, the Jonassus is the kind of touch-sensitive overdrive with a sweetly refined saturation and warm grind that puts it in a class of its own in the context of par excellence gain pedals.

The Jonassus is a dual-channel stompbox with a low-gain channel on one side and a medium to higher-gain channel on the other. Each channel has its own volume and gain controls to adjust, and a shared tone control. Two rugged footswitches govern on/off and channel select, and DIP switches allow you to set up the pedal in three dual-channel configurations.

For example, you can set one side to be low-gain and high-gain on the other, or arrange it to be two separate low-gain or high-gain channels. And because of the separate volume and gain controls on each channel, you can basically set up rhythm and lead presets. The pedal requires a 9VDC power adapter and is true bypass.

I found each clipping stage sounds exactly as mentioned above with varying degrees of overdriven smoothness, with the transparent tone control enhancing the drive character to compliment whatever amp you’re using.

I loved the LED clipping the most, because its wide-open crunch cuts through as a rhythm tone, and adding more gain to it for a solo channel offers plenty of articulate saturation and sustain that’s so harmonically rich and dynamic, you’d swear it’s coming from your amp rather than a pedal. Yep, this Jonassus is staying with me.