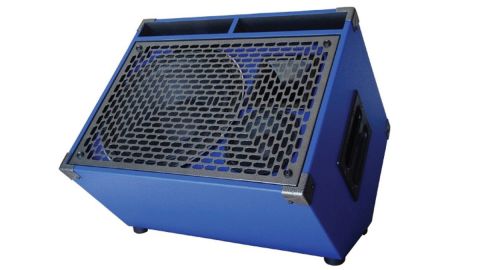 If clean, accurate tone and sheer knock-down power are your thing, you may have found the last cab you’ll ever want, with the exception of perhaps another Fearless.

Sometimes, the most interesting developments come from independent thinkers who approach design from a problem-solving standpoint rather than a financial one. What if someone decided to build the absolute best bass cabinet possible, without the constraints of having to mass produce and turn a profit?

That’s exactly what Dave “Greenboy” Green set out to do. His earliest cabs (the Fearful line, stylized as “fEARful”) approached the challenges he encountered as player in the low F# range by using high-end drivers, crossover components with higher ratings and tighter tolerances, and careful enclosure design.

But after unsuccessful attempts to get them built by commercial cabinet makers, he gave it the old D.I.Y. try.

In an unusual move, Green made the plans for his Fearful cabs free to the public, and bass-forum geeks everywhere started building their own, with varying degrees of success. It was out of this movement that a number of “cabinet luthiers” distinguished themselves with quality and consistency that could be marketed. Mark Robertson of Nashville’s BNA Audio, Joseph Hawley of jHawk Customs in Phoenix, Arizona, and Don Barry of Barry Audio Design in Sterling, Massachusetts, banded together to form Greenboy Audio. The company is one of a handful in the U.S. and abroad authorized to build Green’s newer designs, including the startling Fearless “F series” enclosures.

Like their Fearful predecessors, the three-way Fearless cabs owe more to high-end PA main-on-top-of-subwoofer stacks than traditional bass cabs, but in a smaller and lighter form factor, and voiced more specifically for bass players.

While each of the Fearless cabs has its own recipe, they are all built around long-excursion, high-displacement woofers—in particular the neodymium Eminence Kappalite LF, which is considerably more expensive than woofers used in commercial bass cabs.

The midrange is handled by a 5" FaitalPro driver, and the highs are widely dispersed by a B&C horn with a Faital Pro 1" compression driver bolted on. With a three-way design, an effective crossover network is critical to avoid gaps and/or overlaps between the drivers’ frequency ranges.

Throughout the entire line (1x10, 1x12, 1x15, 2x10, 2x12, and 2x15 models are available), the crossovers are tailored to the specific responses of the drivers, baffles, and even the typical listening positions of the individual cabs, rather than settling for a one-size-fits-all solution. These complex crossover designs use multiple “knees” and slopes to tailor both frequency response and phase, the goal being to provide a coherent, time-aligned response at a variety of angles.

The cab itself is remarkably lightweight at 32 pounds, and its wedge shape allows for traditional vertical, horizontal, or angled-back positioning. Built with 12-millimeter, 9-ply Baltic birch plywood, the cab is well braced and damped to produce a stiff enclosure with minimal heft.

The cabs are typically shipped with a DuraTex paint finish, and can be any color your heart desires for a minimal up-charge. I’ve never had to consider this option before, but a quick trip to the paint store helped me choose a deep blue that was color-matched perfectly. It looks very sexy but understated with a black hammertone, powder-coated grille and matched hammertone, powder-coated hardware. (Grilles can be had in a variety of finishes and styles as well, and for those who look at a 2x15’s grille and see a canvas, custom graphics are available.)

The Fearless grille is engineered specifically for the correct stiffness and weight, with large holes, and is easily mounted. “Grille rattle” is a pet peeve of mine, but after two van tours, many local gigs, and a whole lotta low end getting pumped through it, the F112’s grille remained vibration free.

The back panel (also powder-coated) has two Speakon inputs, a tweeter attenuator, and a two-position switch that changes the midrange speaker’s response voicing from aggressive to more subdued. I found the difference to be more apparent when playing full-spectrum information (as in an mp3) through the cab—but it also has a subtle effect on the most savage of all bass signals, slap upright bass.

As builder Mark Robertson’s “day job” is being one of Nashville’s busiest upright players, his field testing and input have gone a long way toward making the Fearless line a favorite with the high-volume upright bass crowd.

This mode of work represents one of bass playing’s biggest sonic challenges, and from my own extensive live testing, I can confirm that the F112 (combined with a powerful amp) consistently delivered the best high-volume upright bass sound I’ve ever had: clear and natural highs, perfectly sculpted mids, with massive but controlled low end and great articulation. It sounds just as good at low volume, too.

The cab was delivered 15 minutes before the van left for a two-week tour, and throwing caution to the wind, I took it along for the trip in addition to my regular 4x10 road cab.

After the first night with the F112, the 4x10 never left the trailer. First, let’s remember that we are talking about a single 12" woofer in a box that stands 20" high. This is a small cab by anyone’s standards, but powered by a Carvin DCM 2000 amp (in bridged-mono for a full 1,200 watts into the 8-ohm cab!), fronted by a BBE BmaxT preamp, this little monster absolutely ruled the lower realms onstage and in the house with a rocking four-piece Americana band.

The sheer performance level of this cab was shocking at first—it gets super-loud without farting out, and it eats low B’s for breakfast. The low end is not only robust, it’s tight, controlled, and well balanced with the midand high-frequency drivers to produce a natural full-range tone.

I played my Blast Cult one4five (running through the Channel Blaster preamp) into the BBE/Carvin/Greenboy rig and was rewarded with breathtaking (like a punch to the gut) low end that retained its roundness, while the highs sounded sweeter than I’ve ever heard them.

I didn’t have to use extreme EQ to get a great slap tone—just a mild rolloff around 1kHz and the cab seemed to do the rest. I’ve had the opportunity to play many different electric and upright basses through this cab, using several different amps. I’ve taken it out on low-volume jazz upright gigs, high-energy rock gigs, and every time, the F112 surpassed my expectations—not only of what a cab that size can do, but how well it could be done.

The F112 speaks quickly and accurately, produces high volume levels without giving out, has a well-balanced response that works equally well for electric or upright bass, and it weighs 32 pounds. While they are priced higher than your average mass-produced cab, they are certainly not the most expensive box on the market, and the performance more than justifies the cost. Since the F112 came into my studio, I’ve had a hard time playing through anything else. It seems to make every bass and amp sound their best, and on the gig, it is simply unstoppable.