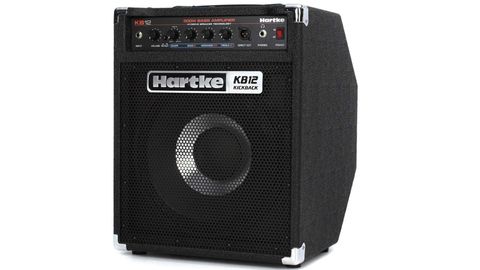 A reasonably priced combo that packs a wallop.

The multi-faceted hustle that characterizes my musical life involves an eclectic array of musical jobs, lest I become that all-too-common cliché: a musician unable to afford living in an expensive city.

A constant companion, though, has been the steady march of students through my apartment door, many of whom are rank beginners. What’s remarkable to me is that many of these nascent shredders don’t own an amp, meaning they’ve never been responsible for the visceral thrill of a thunderous open E. It’s like they’re surfers who only frequent waterpark wave pools; they’re missing the point.

Obviously, I encourage students to get an amp post-haste. Back in the day, given that most beginners were just dipping their toes in the water, I’d suggest an inexpensive combo amp, mentioning that if the bass bug really bit, they’d probably outgrow it quickly as they start competing with other instruments in a band.

The Hartke Kickback KB12, though, is an exemplar for a new era in affordable bass combos. It’s no more expensive than the average 100-watt practice amp of yesteryear, but it delivers a legit 500 watts from its Class D amp through a time-tested HyDrive neodymium driver.

The KB12 would be amp enough for a lot of small-to-medium-size gigs, especially because its “kickback” design makes it more audible on a crowded stage. The sound is quick and punchy, and there’s enough power on tap to give the internal speaker a run for its money.

Bass response is respectable for a small combo, and while the tweeter-less amp doesn’t sizzle, it certainly has enough high-frequency extension to convey decent snap and sparkle.

The KB12 is well constructed for its price point, boasting nothing fancy but loaded with robust-feeling jacks, pots, and switches. Its top-mounted handle works well, and the amp’s light weight made schlepping a cinch. Its namesake feature is a great idea, although angling the driver away from the floor does reduce low-end response due to reduced bass-frequency coupling. That’s not Hartke’s fault; blame physics.

The simple EQ is voiced effectively, with the sweepable low-midrange shape control helping to carve out boxy frequencies or scoop out mids for a burnished slap sound. It’s great that Hartke includes a balanced XLR output, although I would have liked to see an auxiliary stereo input, given that a lot of players will want to practice and play along at home.

The KB12 quickly shot up my list of go-to combo amps. It’s not the cheapest model out there, but there are few amps that would make such a good companion for the transition from neophyte to seasoned veteran.