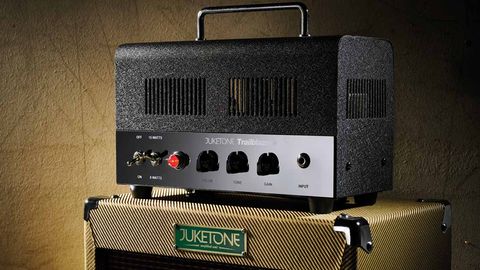 The Juketone Trailblazer is going to be a crowd-pleaser. All those still misty-eyed about the Terror will love its hot EL84 crunch and portability, and at this price, it's offers a versatile little valve head to players on tight budgets.

Juketone’s range of affordable valve heads and combos has grown in popularity over the past few years as many of us seek out smaller and more portable amplification solutions.

But it’s only recently that the company has added its own lunchbox model. The now-familiar steel case format actually predates those big, heavy plywood boxes of the classic rock era, with early hi-fi metal jacket designs dating back as far as the 1940s.

However, the modern guitar trend is often credited to one manufacturer in particular, Orange, who ironically made some of the heaviest amps and cabs ever, back in its first golden era during the 1970s.

Orange’s original Tiny Terror, introduced in 2006, revolutionized the guitar amp market and went on to become one of the best-selling amps of the last 30 years.

While Orange has long since moved on from the original design, the compact twin-EL84 format hasn’t lost any of its desirability, so to cater for those who perhaps missed out on the original boom, Juketone has introduced its Trailblazer head, inspired by that original Tiny Terror design.

At the back of the Trailblazer you'll find a pair of 4 and 8-ohm speaker jacks and a series effects loop.

The Trailblazer comes in a robust steel case finished in textured black paint, with a perforated lid set off by a chrome carry handle and matching chrome front panel, plus a white screened logo and control labels.

Like the original, it’s a straightforward no-frills design with a single input jack feeding controls for gain, tone and volume. Next to the retro jewelled power indicator are two chunky chrome toggle switches for mains and standby, the latter with two ‘on’ positions offering a choice of full or half power, which translates into roughly 15 or eight watts.

On the rear panel, there’s a pair of eight-ohm and four-ohm loudspeaker jacks together with a simple series effects loop, a small but useful refinement over the original design.

Inside the case, there are two printed circuit boards, a large one holding most of the components including the front-panel controls and valve sockets, and a smaller one for the rear panel jacks.

Despite the low price point, the components are reasonable quality; metal film resistors are used to keep noise levels down. The minimal internal wiring is neat and clean.

Under the perforated steel cover, two Chinese Ruby 12AX7 preamp valves are joined by a pair of Ruby EL84 pentode output valves, with decent-sized mains and output transformers. The amp is compact and portable – roughly the same size as an average toaster and not that much heavier.

We auditioned the Trailblazer with a matching Juketone 1x10 open-backed cabinet fitted with a Celestion Ten 30 loudspeaker and using our regular test guitars: a Strat fitted with Duncan Alnico Pro single coils and an old Les Paul fitted with a pair of Duncan PAF-alikes.

Despite its simple controls, the Trailblazer conjures up a respectably wide range of tones, from nearly clean indie-inspired jangle to blues, classic rock and almost metal. There’s a distinct Brit influence to things, too, emphasized by the 10-inch Celestion’s slightly compressed midrange grunt.

For more open and detailed clean tones, we’d say a 12-inch driver would probably be a better option, but for recording with a microphone or two, the 10-inch cabinet will be much quicker to dial in for most mixes as the frequencies sit in just the right place for most musical genres.

The tone control’s effectiveness seems to vary depending on where the gain control is set, with more treble roll-off at higher gain settings. With the gain dialled back for cleaner tones, there’s less reduction of highs and the volume drops significantly.

However, pushing the gain knob back beyond halfway reveals that distinctive EL84 grind and things get much louder, even in the low-power eight-watt mode.

Despite the relatively low-output pickups on our Strat, there’s plenty of overdrive and it’s very controllable, so even on full gain you can pick gently and things clean up nicely, returning to thick, heavy distortion just by hitting the strings harder. This is easy with valves yet it’s a trick many digital and solid-state amps still find difficult to do.

Flipping the standby switch the other way unleashes the Trailblazer’s full 15-watt output, adding a sizeable chunk of headroom that will cope well with most smaller gigs – when we’re eventually allowed to play them again.

For live use, a 12-inch cabinet is generally a better bet because the bigger cone pushes more air, while the extended bass response adds a sonic authority that’s harder to create with smaller cabs. The Ruby EL84s get very hot in use; fortunately, there’s plenty of ventilation slots in the steel cover to keep things as cool as possible.

One thing that made the Orange Tiny Terror so successful was the wide tonal range of its deceptively simple circuit. Juketone’s Trailblazer is broadly similar, capable of switching seamlessly between many musical genres with a couple of twists of the gain and tone knobs.

In fact, the overall sonic experience is very good indeed when you consider the price point, which is impressively low as the Trailblazer is sold direct, with no distributor or dealer mark-ups to cover.

Some of you may already be aware that the part state-owned Chinese valve maker Shuguang, which supplies several resellers including the Ruby valves used by Juketone, closed its manufacturing plant in December 2019 to prepare for a factory move.

This was already expected to take several months at least and is now likely to be further delayed because of the Coronavirus pandemic. The guitar world isn’t going to run out of valves anytime soon, but factories that are building valve amplifiers in China may encounter local supply difficulties, which could push prices up.

For now, though, you can let your fingers do the walking to Juketone’s website and buy the Trailblazer for a whisker under £250, delivered free anywhere in the UK.

That’s a proper all-valve head for less than some budget solid-state practice amps: a pretty compelling reason to check out Juketone while the offer’s there. Who says good tone is always expensive?