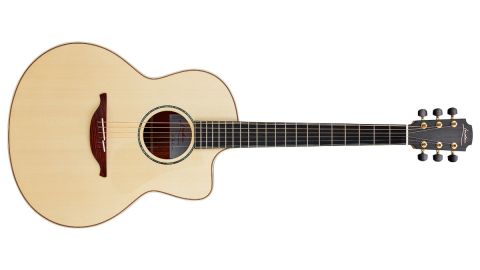 A superlative guitar for fingerpickers - although it comes at a price.

Lowden’s reputation among the fingerstyle elite is well established. After all, players such as Richard Thompson, Jon Gomm, Pierre Bensusan (all of whom have signature models within the range) and the late Eric Roche can’t be wrong.

And the variety of styles on offer between those four players is testament to the versatility inherent within the instruments from George Lowden’s workshops. Much of the work done there is satisfying customers’ special orders, the deal being that you can pretty much choose your own spec variations based on the different models in the line.

Different wood combinations and many other refinements are all in a day’s work for George’s team of luthiers. And if you have something really fancy in mind – fan frets, for example – there’s no problem there, either.

The company’s FM range  of acoustic guitars is something a little different in the Lowden catalogue in that it dwells within the 35 and 50 ranges as an option. The 35 - as seen here in our review sample - is AAAA grade woods with a slightly reduced body depth over its standard F model, and the company tells us that “the FM is voiced to project bright clean lead lines or fingerpicking runs with extra emphasis on the lower mids - the perfect guitar to cut through the mix”.

It certainly looks the business. From the minute we opened the rather flash-looking case, we found ourselves under the spell of the guitar’s clean lines and modest demeanor. If you’re used to thinking that Lowden means cedar tops, you might be in for a surprise here, because we’re looking at a very pale and whitish alpine spruce for the FMc’s soundboard.

Of course, it’s sheet white now, but give the guitar a few years of travel and stage work and it will mellow down to the more familiar amber glow. As for the quality of the top, the grain is tight and straight, with expert bookmatching and no evidence of any features such as bear claw.

Lowden has very sensibly opted for a clear scratchplate under the sound hole so that the timber isn’t in any way upstaged. The abalone and rosewood rosette merely enhances the guitar’s simple elegance.

Moving on to the back and sides, AAAA-grade cocobolo is the choice here, and if you’re not familiar with it, take a seat while we elucidate.

One of Lowden’s more well-known characteristics is the top-loading bridge with a split string saddle for improved intonation.

The guitar’s back and sides are AAAA-grade cocobolo that hails from Central America.

Lowden-badged Gotoh 510 tuners sit three-a-side on the FMc’s headstock atop a five-piece mahogany/rosewood neck, while a narrower 43.5mm nut sits at the top of the FMc’s ebony fingerboard.

Lowden has used a transparent pickguard so that the elegant simplicity of the guitar’s alpine spruce top remains unbroken.

Cocobolo is of the Dalbergia genus - a member of the pea family - and grows in Central America. It has more of an orangey brown hue, as opposed to Indian rosewood’s darker chocolatey appearance.

Sonically, it’s an excellent wood that has similarities to koa with a slightly more woofy bottom-end, although not quite as splendidly dark and gothic-sounding as Brazilian rosewood. The combo here of the alpine spruce and cocobolo bodes well and we’ll find out more after a tour of the FMc’s other timbers.

The neck here is mahogany with Lowden’s familiar twin rosewood strips running left and right of centre. A set of Gotoh’s gold 510 tuners with ebony buttons sit three-a-side on the headstock, and here we’ll pause our sightseeing tour for another look at how the FM spec varies from Lowden’s standard models.

Usually, the nut width on a Lowden is more to the order of 45mm - although, of course, if you place a special order you could choose the nut width you prefer - but here we find the narrower 43.5mm (which might cause murmuring among hardcore fingerstylists to whom an extra 1.5mm means the difference between widescreen digital ballet and the occasional narrow-lane pileup).

In any case, leaping over the nut we find an ebony ’board that is uncluttered by any position markers but is bound with a thin pinstripe of maple on either side.

Back down at the body end we find the familiar split string saddle set amid the top-loading bridge, which has always been a familiar feature on Lowden guitars. The actual body size of the FMc sits in-between the spec you’d expect from an OM and a Grand Performance shape.

The model we have in front of us has no pickup installed, but Lowden will fit either an LR Baggs Anthem or Highlander IP1/IP2 - or, we assume, anything you fancy - at the factory upon request.

Turning the FMc over in our hands, it’s light in weight and a comfortable fit in the sitting position. There’s no second strap button, but we would imagine the general wellbeing of the instrument would transfer to a standing position, too.

The slightly trimmer neck profile feels good in the hand; we’ve played many Lowdens in the past and always found the necks to offer easy transit for the left hand whatever the spec says. It’s nicely proportioned and the satin finish makes gliding about the fingerboard a breeze.

A few probing chords begin to reveal the FMc’s voice and the first thing we notice is the volume. This is a loud guitar - or should we say, it’s a loud’un - and it’s very brightly voiced, as well. As we said earlier, Lowden declares it to be a guitar that will cut through a mix and that’s certainly our impression.

Some brighter guitars have a harshness to them, but this isn’t the case here and we would expect some additional mellowness to follow in the ensuing years as the alpine spruce top goes about the business of opening up and maturing.

At present, there’s a good amount of tonal variety on hand here. Played near the bridge even more brightness emerges, but it’s still on the musical side, without a hint of the glassiness you sometimes find in that playing position. Play near the soundhole, however, and everything takes on more of that familiar OM-style freshness and bounce.

The sound is fruity and packed with harmonics, and we can imagine fingerstylists would be delighted to immerse themselves in its riches.

But what about that narrow nut? We found we could forget about it entirely and there were no collisions apparent, even with our generously proportioned digits. Maybe this is something to do with it being in balance with the slimmer neck profile - who knows? We just found that we could play anything we wanted - simple strums to a couple of fingerstyle fandangos - without any problem at all.

As ever, as far as spruce-topped acoustic guitars are concerned, we would be very interested to reacquaint ourselves with this instrument when it’s got a few thousand notes on its clock and hear those tonal refinements that only time can deal out. From what we’ve heard, it’s going to be a gorgeous longterm companion for some lucky plucker.

All that’s left to discuss is the price. At £5.6k the FMc represents a hefty investment and places the guitar well within the serious to pro-player marketplace. Bear in mind, too, that it doesn’t come with a pickup installed, so if you were looking to gig with it, you’d have to fork out more cash in order to upgrade the FMc to stage readiness.

But pro-orchestral players howl with laughter when informed about the money that changes hands for our top-of-the-line instruments as theirs are nearly always in the five-figure bracket. The bottom line is you get what you pay for and the FMc is a superbly crafted pro-grade guitar that will stand up to the rigors of the road and turn in its best performance at every gig. And you can’t put a price on that.