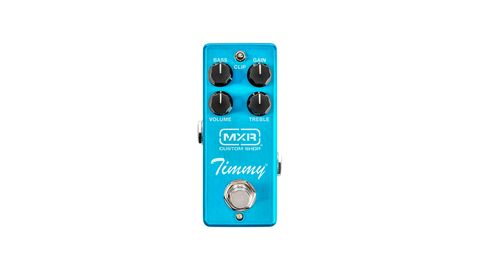 The Timmy may have finally gone mainstream, but it remains one of the most transparent and responsive overdrive pedals on the planet, especially in this compact, versatile incarnation.

If you’ve never heard of Paul Cochrane or his much-sought-after Tim and Timmy pedals, don’t fret - you’re not necessarily supposed to have. Cochrane has no website and a minimal presence on social media, and he pretty much builds his Timmy pedals one at a time, which makes obtaining one something of a challenge.

But if you’re a habitual denizen of internet guitar forums, you’ll also know the Timmy pedal routinely shows up on every list of best overdrive pedals - including ours. Why? Cochrane’s creative design of a super-transparent, amp-like overdrive has been in constant demand for armchair tone chasers, let alone notable musicians like Aerosmith’s Brad Whitford and L.A. studio hound Lyle Workman.

Luckily, you no longer have to wait to get one because Cochrane has partnered with MXR to bring his legendary pedal to more guitarists with the MXR Timmy Overdrive. And even better, it arrives as a much-in-vogue mini pedal.

The MXR Timmy Overdrive features four knobs for Volume, Bass, Gain and Treble, along with a three-way Clip switch. Like the original pedal, the Bass and Treble controls are configured as cut-only.

The Clip switch provides three preferred clipping modes (one asymmetrical and two symmetrical) that offer varying degrees of saturation, low and high headroom, dynamics and compression. In order to maintain sonic integrity as a miniature pedal, Cochrane and MXR chose the LF353 op-amp chip known for its increased output, gain and high fidelity.

To all those gear-forum guitarists who will undoubtedly compare this pedal to the original, we can most likely all agree that the MXR Timmy Overdrive delivers transparency with a capital T.

It’s quite remarkable, really, between clicking the pedal on and off, the MXR Timmy sounds as seamless as switching from clean to a mild gain channel from a tube amp. It does not have as much overdrive as you would expect, but it pleasingly adds a gradual gain-bump to the point of light compression and natural breakup.

Compared to other overdrive pedals, the MXR Timmy has more dynamic presence, clear top-end chime and warmer midrange, all of which reflect a far more musical-sounding overdrive. It also blends in beautifully with amplifier crunch if you require even more harmonic complexity.

I found the middle position on the switch to be the best sounding of the three clipping stages, where either the overdriven tone - or even set as a clean boost - had the most breath and body, and touch-responsiveness.