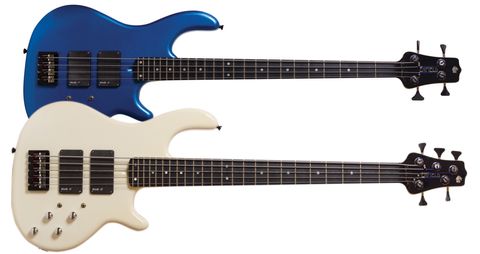 Great basses that cover a lot of sonic ground.

Ever since Enfield’s Cannon bass range was unveiled at the end of 2008, the Enfield range has undergone various developments in terms of features, aesthetics and the odd nip and tuck here and there.

The ever-genial luthier Martin Sims has sent us these new ‘leaner and cleaner’ instruments for our perusal - so what sets them apart?

These new Air-branded models are constructed from lightweight mahogany in color gloss finishes, the pickguard has been removed for a ‘sleeker’ visual and a Glockenklang two-band preamp with four controls and side-mounted jack socket has been utilized as standard.

The curvaceous body sits comfortably against the player, and contouring front and rear improves the way the body hangs for the player, while the lower cutaway on both basses offers unhindered access to the upper frets. The four-string model hangs a little better due to the reduced timber mass, and despite both models displaying some headstock bias, both sit perfectly once placed on a strap.

A magnetic backplate provides easy access to the control cavity, which is well-shielded and tidy. Considering the ‘magic’ available courtesy of the Tri-Logic switching system and the Super Quad pickups, the actual setup is physically uncomplicated.

Both necks sport a satin finish and ashallow D-shaped profile, and both basses are supremely set up, with no apparent sharp frets. The action on both was a little too low for my ‘digging in’ preference, but that is easily adjusted.

We’ve discussed the Super Quad pickups on several occasions before, but for those not in the know, each pickup has four coils which allows the pickup to be selected in split-coil, single-coil or humbucker modes. This is controlled by a switch with a three-color LED indicator: red (split), green (single) and blue (humbucker) - so for ease of use, think in colors.

Both basses are fitted with apair of pickups, so using the pan control alongside the switching opens up a whole palette of tonal possibilities - and that’s beforewe’ve made use of the tone controls.

Both basses are resonant and sustain strongly, although there is a throatiness to both that can be heard unplugged as well as amplified. Explaining all the available sounds would fill this entire page, so let’s just say that although the pickups can’t sound exactly like a 1964 Precision or a ’72 Jazz for obvious reasons, they approximate those tonal qualities very closely.

Clarity across the board is very impressive, and percussive players will have aball - but traditional playing styles are equally well-conveyed. Warmth and roundness can be dialed in easily, while a grinding quality can be called upon if you’re a rocker.

The two-band EQ is clearly defined, accentuating the natural punchiness. If you want a more traditional tonal display, the push/pull volume pot will switch the bass into passive mode. The treble control can also be used as a passive tone control.

Playability and comfort have always been of paramount importance to Sims; the level of finishing is of a very high calibre and, with 18mm string spacing for the four-string and 17.5mm for the five-string, I can’t foresee any tired fretting hands.

These models are a fine addition to the Sims stable, and with so many useful features, they have much to offer the player. Customization is possible in several areas but as a starting point, these basses are a splendid introduction. Check them out at your earliest convenience.