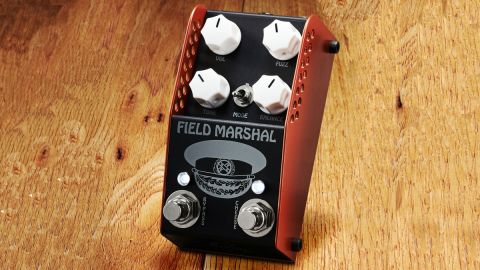 An expanded range of fuzz sounds encompassing the unique feel and tonal character of its much-loved predecessor.

So far, Dan Coggins’ ongoing collaboration with ThorpyFX has yielded two modulation pedals, The Deep Oggin chorus/vibrato and The Camoflange flanger, and The Fat General compressor, a design that evolved directly from his now-discontinued Dinosaural OTC-21 compressor.

In a similar vein, the Field Marshal fuzz harks back to Dan’s long out of production Big Cheese fuzz pedal circuit. Building upon the enduring success of the original 90s boutique boomer, not only does this ‘MK II’ ThorpyFX versions feature additional ranges of sound and function, it also comes in a more rugged, compact and pedalboard-friendly format. And without a several hundred quid price tag!

With more of Dan’s authentically enhanced Lovetone circuits in the pipeline (a revamped version of the Meatball envelope filter is next, we understand), we decided to find out why so many people have been retiring their original Lovetone pedals to the safe confines of the home and studio while investing in the next best thing. Or should we say the next better thing?

In classic ThorpyFX military style, The Field Marshal derives its name from “the biggest cheese in the army”, according to founder Adrian Thorpe, and is based on the Lovetone Big Cheese circuit designed by Dan in the early 90s.

This flavour of fuzz falls somewhere between a Big Muff and a Fuzz Face, but with a new and expanded range of functions it could easily be viewed as several fuzzes in one box.

The original Big Cheese featured a four-way switch that has been supplanted here by a three-way toggle – enabling gated fuzz, flat mids and midrange hump (from top to bottom) – and a tone stack bypass footswitch labelled Cheese. This can be used as a solo boost and/or to switch between two distinct fuzz sounds.

Unlike many fuzzes, The Field Marshal doesn’t appear to be overly fussy with respect to its position in the signal chain, and with the ability to clean up using the guitar volume control, a large palette of very usable sounds can be explored.

An expanded range of fuzz sounds encompassing the unique feel and tonal character of its much-loved predecessor.