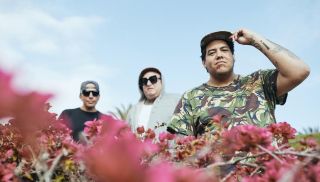 “It’s a party,” says Rome Ramirez, singer and guitarist for Sublime with Rome, about the band’s music and live shows. Ramirez is speaking to Guitar World while en route to Bloomington, Indiana on Sublime with Rome’s tour in support of their just-released new effort, Blessings.

And indeed, the band’s shows boast an ideal party soundtrack, with classic Sublime ska-punk-reggae tunes like “Wrong Way, “Santeria” and “What I Got” sitting next to buoyant Blessings tracks like “Light On” and “Blackout” in a setlist sprinkled with any number of covers, from Bob Marley & the Wailers’ “Jailhouse” to Bad Brains’ “House of Suffering” to the Grateful Dead’s “Scarlet Begonias.” “I get a lot of joy out of this music,” Ramirez says. He spoke to Guitar World about that music, as well as the new album, guitars and Sublime’s storied past, in this exclusive interview.

How did Blessings come together?

Back in 2017 we were planning to come up with some new music and put together a record, but we had been touring a whole bunch and we hadn't really had the chance to properly go home and just kind of live a little bit and take in some inspiration. It was right around that time where I found out that I was going to be a father to my son, who’s two now. And if you know anybody with children, it's a pretty fucking life-changing thing! So that caused us to be at home for a little bit—we took the better part of about eight months off.

But toward the end of that time it was like, “Yeah, let's get back in the studio and really try and do something great.” And in February of 2018 we did [the Blessings track] “Wicked Heart” and that got everybody excited. I mean, [bassist] Eric Wilson, who's not a man of many words, was like, “This is a hit! All we can do now is fuck it up.” Management was excited, the label was excited, radio programmers were excited. So we knew it was the start of a great album. Then when I wrote the lyrics to “Blessings,” it was at that point that I knew exactly what we wanted to do with this album. From there we finished everything up.

You worked with Rob Cavallo on this one. What did he bring to it from a production standpoint?

Rob Cavallo brought the rock. He brought everything that any reader of this magazine would want to hear. [laughs] Rob Cavallo rolls with the greatest shit—road cases of gear that have collectively sold, like, a billion records. He's got Lindsey Buckingham's Strat, a head that Billie Joe Armstrong used for [Green Day’s] Dookie and Kerplunk, a snare drum from so and so—all this crazy stuff. So that was really cool. Because I'm quite a boring guitar player in essence—I love my guitar and I play the shit out of my guitar, but I only have two guitars and I only use one live.

A guitar is almost like a limb to me, like another arm or another leg—it just does what it does. And because of that I can be a bit quick on the recording end. But Rob is very much a musician's musician. So one of the reasons the album sounds so big is because I'd be like, “Cool, that sounds great. Let's get to the bass. Let's jump into vocals.” He'd be like, “No way—that guitar tone sucks! Let's beat it.” And then he would change the microphones, plug in a new Supro amp or something, do this, this and that and all of a sudden you're like, “Oh, shit, that sounds really good!” He just pushed us in these really old-fashioned, awesome ways that made for a really amazing-sounding record.

What was your main guitar and amp setup in the studio?

I used my Stratocaster, which is a ‘96 Fender that has been hacked on by a million people, but it sounds really good. And Rob has this Strat that the Fender Custom Shop made for him. It’s like this $15,000 guitar and it sounds so good. So I use those on a lot of songs. And then on one song I even used a [Gibson ES-]335. And as far as heads, we used some of Billy Joe’s stuff, a Marshall and an Orange, for the distorted sounds, and then we used my Divided By 13 head for cleans. I know we had a Fender Twin Reverb as well.

Onstage you guys play a lot of new and old Sublime music, but also a fair amount of covers, and from a wide range of artists. What do you like about doing that sort of mix?

Traditionally, people are just so used to shows being like, you know, the band plays the band stuff, and then they're probably going to play a lot of their new album because they're promoting it. You can kind of see the formula. But if you think about Sublime, well, what is Sublime's music? It's a concoction of a lot of other fucking music, you know what I mean? So that carries over into the live thing. When I first started jamming with Eric [Ramirez hooked up with Wilson in 2009, 13 years after the death of Sublime singer and guitarist Bradley Nowell] and we started doing Sublime with Rome, he would always be like, “I want to add this song and I want to add that song.” After a while I realized, “Oh that's what Eric did in Sublime.” That’s what Sublime is. It’s like a party.” And you wouldn't go to a party and say, “Yo, we're gonna play this one CD.” People would be like, “Get the fuck out of here!” They wanna hear different shit. I think a Sublime show is that same vibe.

Is there a song from the early days of Sublime that you particularly enjoy playing?

There's definitely a handful. One of them recently has been “Let’s Go Get Stoned” [from 1992’s 40oz. to Freedom], because it has, like, a jazz intro and then it goes into this kind of weird Eighties chorus and then it drops into a full-on UB40 reggae thing. It also has a hip-hop sample, it’s a perfect example of who Sublime is. And when I sing that shit live, I don't know, I just have so much fun singing that live sometimes that I'll just get outside my body. I'll get the chills.

It must be amazing to see people still get so much joy from this music more than 20 years after it was first created.

Honestly, man, I really do get a lot of joy out of just going around and watching people vibe out to this music and tell me their stories about the music. Because I have similar stories from when I discovered Sublime when I was a young man. So we actually have so much more in common than one would think, because we both come from that same fanatical standpoint.

Now that Blessings is out, what’s in the near future for Sublime with Rome?

We've got a bunch of creative stuff dropping. We're putting out a lot of new visuals for some of the songs on the album, and then we have this tour and also a couple other events we're planning, as well as some festivals and stuff. We're ready to support all the music that we just dropped and bring it around the world.