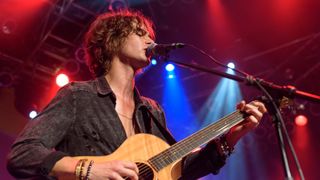 Minnesota native Cobi is a man for whom the blues is less a style and more a way of processing and making sense of the ongoing turd-dump that is real life.

His father walked out when he was seven. A year later, Cobi learned a few chords on his mother’s battered Yamaha acoustic. Soon after that came the blues, and a summer spent lawn-mowing, which resulted in him purchasing a Squier Strat electric guitar aged 11. That Strat, though, seemed to speak to him in a way that little else did.

“It just grabbed my soul,” he tells Guitar World. “Then I started hearing blues guitar, so the look of the guitar and the sound of that - I just had to have it. It had to be mine!”

The drive was real. Cobi was gigging bars within the year and on a journey that would take him to study at Berklee, into major label act Gentleman Hall and, as of 2015, a burgeoning solo career with 300 Entertainment.

His style is soulful, raw and saturated, yet his writing is pop enough to land him on Jimmy Fallon. His biggest song to date, Don’t You Cry For Me, released in 2016, has had over 36 million streams on Spotify, yet he’s still to release an album. The recent Island In My Mind marks a return to the fray, in that sense, after a year in which he lost his father and had a child in quick succession.

We spoke to Cobi about his drive to play, his beloved Strats and how he’s making sense of the “total fucking mess of a year” that was 2018.

You started playing live around the age of 12. Young players are often patronized by promoters and audiences, or treated as gimmicks. What was your experience like?

"I mean, I was extremely shy and plus I was trying to sing on top of it. For a 12 year old boy to sing, you've definitely got to come out of your shell. If I look back at those performances on video or something like that, I definitely cringe. But you've got to go through it.”

Were there any particularly hard gigs? What are the things, the ones that didn't go right that you learned the most on?

“Well, fortunately I kind of got to grow up in the bar scene. So, that's like really the only places there were to play around. So I would be playing blues and in bars from like 9pm til one in the morning, starting at 13 years old.

"So the great thing about that was, you would do three to four sets in the night. The first set would be an hour long, then you take a break and then you come back and do set two and then you're way warmed-up.

"And then by like the third set, by the end of the night, you're just like a fire because you've literally been plating for four or five hours that night. That was what really accelerated my growth, you know what I mean? Just to do those long nights like that really helped.

“I was also playing with some older guys too, so the drummer and my bass player were older musical veterans. So, that was obviously helpful. I wouldn't have been able to do it without them, [not least] because they were like my supervisors for the night!"

So were your parents pretty supportive of your music?

“They weren't going to stop me, that's for sure.”

Like many players, an interest in the blues seems to have come hand-in-hand with the guitar for you. Who was the first player you really connected with as a fan?

“Probably Buddy Guy. But a lot of them at once, really. It was like Stevie Ray Vaughan, Buddy Guy, Jimi Hendrix, B.B. King, Son Seals, Jimmy Page, Eric Clapton, it was like all those people.

"And back then actually, it was like in the '90s, blues was a lot more popular than it is now. It was way more of a mainstream kind of music. So it was just different times. But I loved Buddy Guy’s tone, his playing, like that rubber band kind of style bluesy guitar playing. Plus I saw him live when I was a kid and the dude is amazing."

“He's just incredible. He just killed it. And he had the polka dot guitar, he was wearing the overalls, he had the Jerry curl and he just sang like a beast. What he did to people, he would just grab your soul and pull it out, you know?

What do you think it was that you identified with among those guitarists? Why did that avalanche of players hit you when it did, and why did it stick?

“That's a really good question and it's hard to answer because A) it was so long ago and B) it's like, ‘How do you describe that?’ At the time my dad had left. He left home when I was about seven years old. And then a few years later, my mom started seeing another man who's really the one who got me started in the music.

"His name is Wayne. And he was like a total music junkie and boy, he still is. And he had literally a whole room of CDs and records at his house and it was like a freaking CD store in there.

“So he would always be giving me new things to listen to and new inspirations and he was the one that really kind of sparked the blues thing for me at a young age. And I think at that time, I was just struggling with not having a father around and also just young man, like adolescent angst. So the blues, I don't know, I had something that itched that that sound kind of scratched for me.”

How would you kind of describe your approach to the guitar?

“I probably wouldn’t! But just raw I guess. I just do it, I just try to play with raw feeling and raw emotion and that's it. I've done a lot of technical study and a lot of technical work, but playing technically is really not that exciting is it? It's really when you're playing from some kind of emotion.

"The greatest guitar players, that's what made them great - they were exuding some kind of emotion. It wasn't just because they were necessarily technical. Derek Trucks is a great example of that. His playing is perfect, but that's not the point. The point is the soulfulness.

“Then you're always going to hear some kind of bluesy shit out of my guitar. Even if it's not straight up blues, it's always going to have that kind of flavor to it. It's like the beginning of my playing. So it always comes back to that. I guess it's just part of who I am.”

What’s your setup like these days? Are you still a Strat man, all these years on?

“For touring, I usually just use my Silverburst Strat with my Fender DeVille amp. And then for the last few years I've been using a Line 6 POD HD for all my files because I like being able to change multiple sounds at the click of one button, and also have all my tempos synced in and stuff like that.

“I do prefer some analog pedals more - vintage pedals like the Memory Man, or like an Ibanez Tube Screamer, or a vintage RAT pedal, or a vintage Big Muff pedal. Those are definitely my favorite saturation sounds. But for performing and just the ease of use, I like the digital Line 6.”

We really liked your tone. It's very Strat-like, but you're not trying to make the Strat something it's not, but it's like a really beefed-up version with lots of sustain.

“I always come back to a Strat, though. I have a Les Paul, I have a D'Angelico, a new one. I really like D'Angelicos. They gave me a guitar and I use it a lot in the studio. But the thing I love about a Strat for live, is the functionality of it and the way it sits on my body.”

What is the most important thing you’ve learned about Strat tone over the years?

“More than anything else, I think it's having the volume knob where it is on the Strat. Because when you have a lot of saturation you get a lot of feedback, so I love being able to cut that volume down whenever I want and, just by turning the volume down, cut the feedback, on moments where I want a dramatic stop and I don't want any sound, but I still want to have my lead.

"That's where the Strat is just so much more functional. I don't have that same luxury on the D'Angelico, where that volume is right there where my pinky is, to turn it off, you know? So that's why I like the Strat live so much.”

Most of your time over the last 12 months has been spent in the studio. You also had a really tumultuous year back in 2018, losing your father and having a child. How did those events change your outlook on life and your choice of career?

“It was a total fucking mess of a year. That's a tough question. I'll try to spin it positively for you.”

You don't have to.

"Really, I mean, having a baby, first of all, is one of the most life-changing things you can go through. But when you have a family member pass away and then you have a newborn baby come, it really puts all that into perspective. It's like, 'Wow, all those things I thought were so important are really not that important, you know?’

What are your priorities now?

“Being a father is definitely number one, but then obviously a lot of other responsibilities come with that. So, you've got to feed the family. That's another thing that changed.

"My music to me is more than a career - it's my lifestyle, it's my life, my life blood. I go crazy without it. But on the career front of it, it's definitely very important because that's how I feed my family.”

I guess you also realize that you have a limited window to achieve the things you want to in your life.

“No doubt. When your father dies, it's like a level of mortality hits you that you have never experienced in your life before. You really feel your mortality.”

And, without meaning to be glib, has that spurred you forward in terms of your creativity?

“Yeah, most definitely. And I could bring all that back into like playing the blues. That's why the blues is so great: when you really feel it, that's when it sounds the best. It’s how you get it off your chest a lot of times… how you deal with life's problems.”