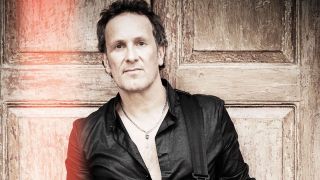 Besides playing on Dio’s classic early to mid-Eighties albums and being a full-fledged member of Rock and Roll Hall of Fame-bound Def Leppard since 1992, this constantly in-demand six-stringer enjoyed stints with Thin Lizzy and Whitesnake. Last in Line, the band he founded with his former Dio bandmates, just released a second album, II. But what Guitar World readers really want to know is...

I’ve heard you’re a huge Gary Moore fan. What was it like filling his shoes in Thin Lizzy? —Bill Engelhard

Gary Moore is my absolute guitar hero. So when Scott Gorham called and asked if I could be a stunt guitar player for Thin Lizzy in 2010, I can’t even put into words how excited I was. Just to be on stage with Scott and Brian Downey and playing the songs of my youth was so exciting. It really ignited the passion I had when I was 17 and the aggressive, angry rock guitar I started out on. I came off that tour and called Jimmy and Vinny and said let’s go into a rehearsal room and play! That’s where the Last in Line band was born.

What originally inspired you to go back to your Dio roots and regroup with drummer Vinny Appice and bassist Jimmy Bain for Last in Line? —Toyja Copeland

It actually came out of a jam with Jimmy, Vinny and me. Then Vinny introduced us to [singer/guitarist] Andy [Freeman]. I thought it’d be fun to go out and play the early Dio stuff in clubs around L.A. All of a sudden we were playing in Europe and Japan. Then the label asked if we’d be interested in doing an album and the three of us sat down and recorded Heavy Crown [2016]. Now here we are with our second album of original music [2019’s II]. It’s become something more than just an offshoot bunch of ex-Dio guys playing Dio songs. It’s a serious side project and something I care about deeply.

How does II relate to the band’s work on Heavy Crown? —Scott Matthews

We lost Jimmy a month before the release of Heavy Crown, and it was a real blow to us. Based on the reaction to the record and how much it meant to Jimmy and the rest of us, we made the decision to carry on and were very fortunate to get Phil [Soussan]. He’s a great fit and the band has grown. It’s part of the reason I wanted to call the album II. It’s the second album and a second beginning. The band has developed and the songwriting is more intricate, involved and ambitious.

I love your tone on the first Last in Line album and the new single, “Landslide.” What did you use in the studio? —Ryan M. Dale

I used Engl Ritchie Blackmore heads for all the solos on both records. When we tracked, I cut the first rhythm with the Engl as clean as I could. Then I went back and did a second rhythm with a different amp. Jeff [Pilson] has an amp called a Naked [by Friedman Amps], which is a custom-made boutique amp that I believe is based on an early Marshall JTM45. I’m always using my Les Pauls, primarily my Dio-era Les Paul that I did the Holy Diver album with. That and my other Les Paul, which is the Custom Shop model that came out last year.

How does it feel being inducted into the Rock and Roll Hall of Fame? —Michael Frey

I’m flattered, as indeed are the other guys [in Def Leppard], that we’ve gotten this level of recognition. Last year really saw us cross the generational divide. Thirty to 40 percent of the audience was young enough to be our children. That’s exciting. We’re a band that thrives on audience participation. The more energy an audience gives us, the more we give back.

In your opinion, what makes Def Leppard so timeless? —John Verilli

There’s always been a certain quality to Leppard’s music, and I can say that having been in a few bands prior. When I joined the band, the first thing that was immediately apparent was the discipline and work ethic. Everything from songwriting and recording to rehearsing and live performance. Our vocals are incredibly strong and 100 percent live. We take incredible pride in our ability to do that.

One of your first gigs with Def Leppard was the Freddie Mercury Tribute Concert in April 1992. What do you remember about it? —Johnny G

My most enduring memory was looking to my left and being very aware that for Joe [Elliott], Phil [Collen], Rick [Allen] and Sav [Rick Savage] it was their first time on a major stage with someone other than Steve [Clark, who died in 1991]. I was very conscious of what they might have been feeling. The other thing I remember was Brian May coming up and playing “Now I’m Here,” which was another major highlight.

How do you warm up before a show? —Chris Pearce

I’m a very heavy player with my right hand so I like to warm up my right as opposed to my left. For years I was more focused on the fingers on my left hand and playing faster. I’ve come to learn that the left hand will follow. It’s more about having the appropriate touch with the right.

I always like the deeper Steve Clark cuts like “Too Late for Love” or “Gods of War.” We don’t get to do them very often because we have the lovely problem of having so many radio hits people want to hear. It doesn’t leave us a lot of opportunities to stretch out, but when we do it’s always exiting.

What’s the most embarrassing thing that’s happened to you on stage? —Hannah Mueller

As anyone who’s done this for as long as I have will tell you, it’s when you’re up on stage and suddenly fall off. It’s happened to me on several occasions. I’m just thankful it hasn’t happened in the era of cell phones and YouTube [laughs]. All of my mishaps happened back in the Eighties.

Is there one special venue where you really love to perform? —Robb King

There are a few cities that have great energy, regardless of the venue. Montreal has always been a personal favorite in terms of the energy of the audience. I’m not sure why and it’s not just with Def Leppard. I played there with Dio and even during my brief stint with Thin Lizzy. Def Leppard also played in Buenos Aires in 2017, and it was probably the most rabid audience I’ve ever encountered. The energy off that audience was breathtaking.

What was your live sound setup for the studio recordings on Holy Diver and live Dio concerts? —Dale Paterson

The first Dio album was written and recorded with my wine red Les Paul Deluxe that I bought when I was 15, and a JCM800. When we did the tour I used the JCM800 through Marshall 4x12’s and a little pedal and EQ to kick in for solos and to boost the mids.

Do you still have that custom-sprayed Charvel you played on the Last in Line tour — and can I have it if you don’t want it anymore? —Darren of York

I do still have it. It’s the best-sounding Charvel I’ve ever had. I did strip the paint off it many years ago because it started to crack. It’s been down to the bare wood ever since.

Given the supposed rift between you and Ronnie James Dio, how did his death impact you? —Michele Quinn

Time changes everything and allows you to have a very different perspective. I must admit it’s irksome that all these years later people still think I left the band. I never wanted to leave Dio. I was fired during the middle of the tour. It left a bad taste in my mouth and turned me away from the music. Then in later years Ronnie and I made the mistake of airing our dirty laundry. We should’ve never allowed things to get to that point. It was only after my stint with Thin Lizzy that my passion to play angry, aggressive rock guitar was reignited. Ronnie’s passing allowed me to look at things differently and reassess. That was the whole reason I started Last in Line. I got into playing that stuff again and thought, “Fuck, not only was this great fun to play but I helped create it.” It’s my heritage as much as it was Ronnie, Jimmy and Vinny’s. For many years I allowed myself to believe it wasn’t because I kept it at arm’s length. Now I embrace it.

I’d love to know how your cancer treatment is going. I’m always praying for you and love that you do a side gig to keep your energy going. —Jennifer Cortright

It’s difficult with touring, but I’ve been doing immunotherapy for the last three-and-a-half years. Even when it was at its worst it was the least of my concerns. I’m stubborn and Irish and refuse to capitulate to cancer. I’ve never been so busy and fill every day with work. It makes me happy and my body responds to it. I believe that’s helped me survive it.

How do you approach composing solos? —Derrick Dixon

I never used to construct them at all until quite recently and the reason for that is because the very first solo I ever recorded with Dio was “Rainbow in the Dark.” The solo that’s on that track is the very first take. That imbued me with a false sense of security that as long as I was warmed up and up to speed I could just make it up on the spot. Over the years I’ve come to learn that sometimes it can work and other times it’s like pulling teeth. It wasn’t until recently that I gave myself a pass and decided to sit down and construct something first. That’s how I approached solos on the Last in Line albums. A solo is not just a bunch of notes. It has to follow an expression and a path, and it’s a lot easier to do when I have it worked out. Then it’s just a matter of catching the best performance.

Do you have any tips or suggestions for anyone who’s learning to play guitar? —Sydney McGuire

There are two things I’d tell any aspiring musician. First, find your voice. No two players will ever sound or play alike. Learn to embrace whatever it is that makes you unique and build upon it. The second thing is to work on your personality. When you’re in a band you spend most of the day either in a van, tour bus, airplane or dressing room with your bandmates. You have to interact with people and can’t be an asshole. You can be the greatest guitar player in the world, but if you’re a dickhead no one is going to want to work with you. The most important thing in life is human interaction and how to work with people.