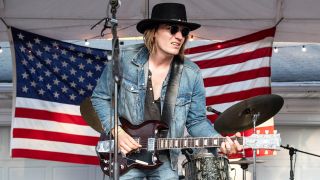 Dylan LeBlanc was thrilled to have nabbed superstar producer Dave Cobb for his fourth album, Renegade. There was just one problem: Cobb didn’t want to use LeBlanc’s backing band, the Pollies, in the studio.

“Dave has a formula, and he likes to record with a certain bunch of players,” LeBlanc says. “So I came up with a compromise: I said, ‘Just try my guys out for a day. If you don’t like them, you can send them home.’”

And what happened at the end of that day? LeBlanc laughs and says, “The matter never came up again. Dave thought the Pollies were really cool.”

Brimming with rousing guitars, a powerhouse rhythm section and hook-laced songs that stick in your head on first listen, Renegade takes everything that was good about LeBlanc’s previous albums and shoots it to the moon.

There’s a palpable '70s rock vibe in song structures and production, and the Louisiana-born LeBlanc says that’s no accident. “I was listening to lots of radio hits from that era when I was writing,” he admits. “The whole time I was thinking Fleetwood Mac and Tom Petty.”

And make no mistake: The album’s defiant title track, and pretty much the whole of side one, is a loving tribute to Petty and the Heartbreakers’ 1979 album, Damn the Torpedoes. “When Petty died, I said, ‘We have to do something to keep his spirit alive,’” LeBlanc says. “If you’re going to do an homage to anybody, Tom Petty sure deserves it.”

To that end, he calls Pollies guitarist Jay Burgess the perfect studio foil. “Jay is definitely a Mike Campbell/George Harrison-type player,” he says, “whereas I’m more of a sporadic kind of player. We have a way of weaving our guitars, but sometimes we do unison leads.”

He points to the soaring solo in Born Again as an example: “I went in and played the main lead, and Jay put a harmony line on top. I always meant for it to sound anthemic, and after I listened back it just sent shivers up my spine. Certain guitar moments can sound like poetry if you get ’em right.”