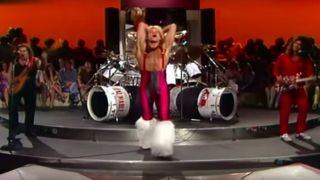 It's hard to overstate Van Halen's impact in the world of rock music.

Their music was as flamboyant as their personalities; grabbing you by the collar and shaking out any resistance or ill will, until you couldn't help but find yourself enjoying their technical, complicated but feel-good brand of hard rock.

During David Lee Roth's original tenure with the band, which lasted until 1984, Van Halen went from perennial L.A. underdogs to one of the most popular bands on the planet.

He, we look back at the "grapes of Roth," also known as the top 10 Van Halen moments of the David Lee Roth era.

NOTE: These songs are ordered alphabetically, not by preference.

This track, one of the last written for the band's self-titled debut, is a straightforward, two-chord basher. Featuring an opening riff built on palm-muted, arpeggiated chords and a third-verse breakdown filled with chiming harmonics, it has become one of Van Halen's most iconic tunes.

Not only has it become a staple of classic-rock radio, it's one of the few tracks that has ended up on the set lists of almost every one of the band's tours.

"And The Cradle Will Rock..." was the sound of Eddie Van Halen changing gears. The first Van Halen track on which he used keyboards, he performed its rhythm part on a Wurlitzer electric piano, fed into his MXR Flanger, which was cranked through his 100-watt Marshall. Though some fans (and some of Eddie's bandmates) were hesitant about the shift, it forecast some of what was to come for the band.

Though Eddie often credited Black Sabbath's Tony Iommi as an early influence (an influence you can hear in the "Paranoid"-evoking staccato eighth notes he plays in the verses of this track), Iommi never played anything as boisterous as this song's intro. Eddie summons a wash of dissonant noise by rubbing the strings with his palm and processing the signal with an MXR Phase 90, creating an aggressive, truly otherworldly sound.

Though the first few seconds are taken straight from the intro to Cactus' "Let Me Swim," what follows is arguably the most inventive, groundbreaking and utterly mind-blowing rock guitar demonstration of the past 35 years. Eddie Van Halen's tour de force simply explodes with screaming pinch harmonies, insane dive bombs and furious tremolo picking. Since its release, this piece has been the barometer by which all shredfests have been measured.

This is Van Halen at their most feral. While Roth whoops and wails, and Alex Van Halen pounds out a ferocious beat, Eddie rubs out animalistic noises on his strings before raining down massive chunks of chording. This is a hungry, powerful band at the height of its powers.

With thundering drums, rumbling bass, outrageously cocky vocals, a killer riff and an acrobatic solo, "Hot for Teacher" is one of Van Halen's definitive songs. After his brother Alex kicks things off with a rapid-fire double-kick intro, Eddie kicks things up an notch, furiously tapping the fretboard of his Flying V before blasting off into what can only be described as power-chord overdrive.

His solo is pure excitement, defined by dazzling ascending runs and a loose, fluid feel that makes even its most challenging passages sound effortless.

Named after the miniature Les Paul replica built by David Petschulat that Eddie used for the song, this track is noteworthy for its bright tone and the way Eddie plucks chordal figures on several strings simultaneously to create a choppy effect.

Originally a demo titled "Voodoo Queen," "Mean Street" soon evolved into a darker, more dramatic tune. Eddie's outrageous intro for the tune, inspired by funk slap bass, paves the way for the brashness of the song.

As a sort-of encore to his world-dominating performance on "Eruption," Eddie unleashed another stunning, tap-infused shredfest ... on an acoustic guitar. Brief as it is, it's another jaw-dropping performance.

This is the Van Halen song that sold a million MXR M-117 stomp boxes. By setting the flanger speed to sweep up in pitch one half of the main riff and down on the next, Eddie created a rising-and-falling effect that gave fans a roller coaster ride.