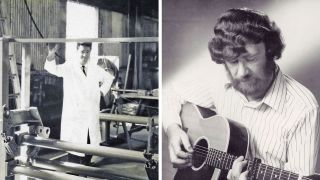 As a guitarist, it’s pretty much a certainty that you will have bought — or at least used — one of the late Jim Dunlop Sr.’s products. Ranging from the humble guitar pick to top-of-the-range effect pedals, there’s virtually no segment of the accessories industry in which Dunlop wasn’t pre-eminent.

Dunlop, who was born in Scotland in 1936, moved to California in the Sixties. His first project — one of the earliest guitar tuners — didn’t quite catch on. Undeterred, he moved on to pioneer improvements to the basic capo at a time when the folk-music boom was at its peak, with folkies desperate for a decent tool to enable them to warble in keys the songs were never intended for. Shortly after this came the “eureka” moment, when he was asked to manufacture a replica of the National metal thumbpick. Thus began the explosion of pick variations that Dunlop pioneered, including his invention of the Tortex pick, which was designed to replace the traditional tortoiseshell pick once that material was no longer available. He introduced a range of materials to improve grip, flexibility and tone; he said he used to scour guitar magazines for information on which picks guitarists were using to inspire new approaches and tweaks.

The effect pedal instantly identifiable with the Dunlop brand is the legendary Cry Baby, the beloved choice of Jimi Hendrix, Stevie Ray Vaughan and countless guitarists since. Out of manufacture for some time, Dunlop bought the brand in the early Eighties. Although not the inventor of the original pedal, his refinements and improvements transformed the unit into the industry standard it has since become. He similarly saw the potential in the MXR brand, which in the Eighties had been in decline from its massive popularity just a decade earlier. Dunlop revitalized the brand — again bringing his innovative instincts to play to fine-tune design elements — and more crucially, perhaps, to bring on board numerous legends with their own signature versions of basic MXR units.

Fondly remembered by everyone who encountered him as a friendly, passionate man — the importance of his contributions to the guitar community is clear from the legions of axe legends lining up to pay tribute. He once likened the pick in the hands of the guitarist to the paintbrush in the hands of the artist — an observation that showed how much passion and care he brought to his work. The Dunlop products found in nearly every guitarist’s gear bag are testaments to his vision.