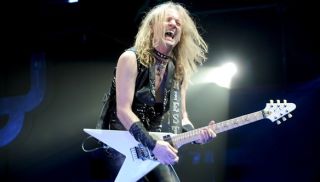 Through most of his 40-plus years as guitarist for the iconic British heavy metal band Judas Priest, Ken “K.K.” Downing lived the rock star life.

Now the metal legend is telling his story in a new autobiography, Heavy Duty: Days and Nights in Judas Priest.

Together with writer Mark Eglinton, Downing takes readers on a visceral journey from his impoverished childhood to the biggest stages in the world. In a vivid and often emotional recounting, the guitarist discusses all the highs and lows of his career with Judas Priest, from album cycles and touring to the inner-band battles with an up-and-coming Iron Maiden. Downing also pulls no punches in describing the events that led up to his departure from Priest following the band’s acclaimed 2008 double album, Nostradamus.

Heavy Duty: Days and Nights in Judas Priest will be released on September 18 by Da Capo Press.

Guitar World recently spoke with Downing about his new book, the legacy of Judas Priest and much more in this exclusive new interview.

What made you decide to write a book at this stage of your career?

So many people have been asking me about it and one day I just felt like it was the right time. I worked with Mark Eglinton, who’d recently done a biography with Rex Brown from Pantera. It was a chronological tour of my life. Mark would call me up and put up scenarios and then ask me what I remembered about them. It was quite a journey, to be fair, opening those locked doors and closets. It was also kind of emotional at times, going back through my life.

Judas Priest songs like “Living After Midnight,” “You’ve Got Another Thing Comin’ ” and “Painkiller” are iconic. Did you have any clue how special they would become when you were writing them?

I often think about that. When Pink Floyd was writing Dark Side of the Moon, they had no clue what they were creating. They were just doing the best they could at the time. That’s what we had always done. We worked hard and were very prolific just grinding away. In the beginning, I’d often say we may not be the best band, but if we stuck together and kept working away, one day we could achieve exactly what we wanted.

In the book, you mention about how, in the early days, Rob Halford was really starting to come into his own as a vocalist, and how everyone in the band had to stay on their game so another band wouldn’t come in and scoop him up.

I felt that we needed to have the right band members to stay the course. When Rob came on board, he was very outgoing and a flamboyant showman. I thought, This guy’s got such a great voice. He’s always going to sing and always going to put on a show, and I was right about that!

You also discuss how satisfied you were with the Priest album, Nostradamus. Can you elaborate on that?

As a heavy metal musician, you always fear that there are people in the world who don’t classify you as “bona fide” or “credible.” Through Nostradamus, we were able to do what we do naturally and interpret it with other instruments. I accept that it’s not every fan’s cup of tea, but as a musical work, it’s on par with what classical performers and composers could do. Even the classical parts were created on the guitar. Considering it’s a long piece, it came together very quickly. It was different and fun to be able to write like that.

After the Nostradamus tour, the band wanted to record an EP. How much of a factor did that play in your decision to leave Judas Priest?

The EP was a big thing for me. The thing that annoyed me about it was that in the twelve months before I left, Rob had released two albums (Winter Songs and Made of Metal). Then we went on tour, and afterwards they wanted me to do an EP. I said, “Fuck no! I’m not doing it. Judas Priest is not an EP band!” After the epic Nostradamus, I wasn’t going to potentially end my career with a fucking EP.

Two-part question: do you think it’s time for Priest to get inducted into the Rock & Roll Hall of Fame? And would you be open to a reunion at the ceremony if and when it happens?

It’s a big enough thing that I think they would want me to go along and play a few songs. I’m not exactly sure how it would work. It was a pity we didn’t make it this year, because obviously time’s not exactly on our side. But I can’t think of a band that has a bigger musical legacy than Priest—a lot albums and a lot of material over a lot of years.

I’ve recently started putting my music room back together. I’m going to get stuck in there during the winter months and see what comes out in the spring. We’ll see where it goes musically for me.

Is there a message you’d like readers to take away from the book?

Part of the story is the fact that a lot of people have it rough and tough growing up. It’s the working class and that’s something many people can relate to. We all got into the music we know and love probably because of that reason. Life was tough and we lived it through music. It was our escapism. Then you have friends and partners and can, at times, get to an unhappy place, to the point where you have to either give up the job or the job will give you up. In the end, it’s the life story of a guy who did the best he could.

When all is said and done, how would you like Judas Priest to be remembered?

As a band who was innovative and true in the style of the archetypal heavy metal band. A band that did a lot of things in their own way. Hopefully, we did a lot of good by bringing people together. I’ve always felt that music is religion, and I really believe it’s a great benefit to the world. Music brings people together.

As a guitar player, I can also tell you this: I’ve recently seen a young girl dressed in black gear, who was probably no more than eleven years old, playing “Painkiller” and knowing it! So, there’s hope for humanity! [laughs]. All of those people will help keep the legacy of Priest alive, in a good way. That’s my hope and dream.