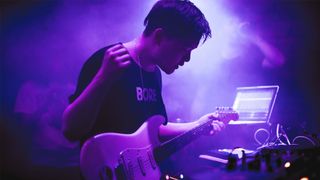 There aren’t many DJs in the world that would name-check Stevie Ray Vaughan and Derek Trucks among their biggest influences.

Perhaps it’s this background in guitar that could very well be the secret to Canadian Dabin Lee’s success - though many would agree a lot of the music he’s known for feels light-years away from anything that could be considered blues.

His latest track Hero, in collaboration with Said The Sky and Olivver The Kid, trades icy synthetic atmospheres against R&B style vocals – incorporating glassy Fender cleans and distorted arpeggiated leads into an incredibly wide sonic palette over its four minutes.

“The guitar has been such an integral part of my musical career,” explains Dabin, on a day off in Chicago.

“I started playing in high school and then when I went off to university I started picking up production and the whole idea of creating everything by yourself, in the box. That felt so appealing to me. Eventually, I got signed to Kannibalen Records…”

It’s the ensuing discussions with his new label that led to the dance musician utilizing a live guitar on stage, bringing a new dimension to the experience for not only himself but also the continually growing audiences attending each show.

“Knowing I was such a guitar guy, they suggested incorporating it live because that hadn’t been done much. I thought it was such a great idea… they left me wondering how the fuck I never thought of it! So I brought my guitar out at my first US show in 2014 and people seemed to love it, so I’ve been doing it ever since.

"Music is all about having fun - just because you’re doing one thing doesn’t mean you can’t do another. It’s important to remember what influenced and inspired you in the beginning and never lose sight of that. Instead, try to bring it into everything you do.”

Who were your first heroes on guitar back when you were starting out?

“A big inspiration for me in the beginning was actually my father. He was an avid guitar player or hobbyist and really into SRV, Hendrix and Led Zep, so I grew up listening to all those players.

"Not a lot of people know how much I love the blues. But quite often those that have seen me play live mention that influence somewhere in the mix. When I started listening to my own music I discovered Derek Trucks, John Mayer and guys like that, who I also really looked up to. They had a massive effect on me.

“As did Satch and Vai, when I was going through a big metal and progressive rock phase. I also went to a Paul Gilbert clinic with one of my friends from high school, seeing someone play like that right in front of me like that was super inspiring.

"I’ve been following a lot of guitar Instagrammers more recently, like Mateus Asato - he’s absolutely killing it and uses a lot of fingerpicking - plus this girl called Melanie Faye, who’s been absolutely crushing it. She’s been support for artists like Maggie Rogers and John Mayer’s been bringing her out too.”

A lot of your leads feel more vocal and melodic than technique-driven. Do you think guitarists are often guilty of overplaying?

“Yeah... I’ve actually seen more and more people in the electronic or dance since try to incorporate the guitar into their live set. Sometimes I get the feeling they’re using the guitar in every single thing, which takes away from the dance side. It can start feeling like a guy constantly playing over every song! I’ve taken a different approach.

“There’s a time and place for the guitar to shine. I’ll go into my arrangements and specifically take out elements so I can play guitar live. That’s more effective that just trying to play over everything, especially songs that weren’t created with the guitar in its instrumentation. It’s all about knowing when the time and place is. That’s been a huge thing for not only my show but also Illenium’s show on this tour we’re on.”

What do you feel are your main stylistic traits as a player?

“A lot of pretty chords, a lot of pentatonic blues and then there’s a lot of hybrid- picking as well. I like to put every ounce of my soul into every note, through attack and vibrato, letting the emotion shine through more than anything else. I got into hybrid picking from my dad’s DVD of Eric Johnson playing Cliffs Of Dover. I couldn’t figure out what the hell he was doing - picking but also using the other three fingers that are available.”

So switching to hybrid picking was quite liberating for you?

“I made it my absolute goal to pick like that and it really changed the game for me and what I’m able to play. I’m not the world’s best alternate picker, so using those fingers has opened up worlds of possibilities that are new to me.

"I actually found YouTube to be a great source for online tutorials, there are a lot of amazing guitarists who will sit you through and take you step-by-step into becoming a better hybrid picker. Plus there’s watching videos of your favorite artists and looking at the tabs, sitting down to learn different parts.”

Given some of the influences you’ve mentioned, picking up a Fender sponsorship must have meant a lot to you...

“That was a big deal for me. My household growing up was an exclusive Fender household! All of my Dad’s guitars, which I would steal at night, were made by Fender. They’ve been a big part of my musical journey, so for them to design me a Strat with my logo embedded into the body was a dream come true.

They recently came out with the Vintera series and asked if I wanted one customized for the tour. It’s a stock Vintera with the neck sanded, just because I prefer those for playability. I liked all of the hardware that came with it so decided not to change any of that. The S1 switch is always fun to play around with - I feel like you get the best of both worlds by using both pickups.”

What are your tips for recording acoustic guitars at home?

“I have a pretty simple setup. I use the Warm Audio WA-87, which is basically an emulation of the super famous U87 microphone, and I find it honestly sounds amazing. When I record acoustics at home, I’ll place it fairly close to the sound-hole though a little above and nearer to the neck, that’s generally where I find the sound.

Traditionally I’ve used Taylors but I’ve recently moved to the States and it’s been a bit of a struggle bringing a lot of my guitars back. It’s hard in Colorado, we’re at such high elevation that if you don’t take care of your acoustics, you will really mess up the neck and action. That’s something I had to learn the hard way!

“Currently, I just bought a Martin DRS1 acoustic electric which I’ve been getting some great sounds out of. I tend to prefer fingerpicking over hybrid on acoustic. If I want that pick tone, I can strike with my nails to emulate that sound, but generally I like the warmer finger sounds.

"That’s why I gravitated to this Martin, it had this earthy and full-bodied tone compared to the Taylor I had at home… not to knock on Taylor. I love those guitars to death, I just find they have a more of a bright sound generally.”

And what kind of software and hardware are you running?

“For my live show and production work, I’ve found Ableton Live really suits my needs. When I started using the guitar live, I also started using it to write pieces that would end up in Ableton through an audio interface.

"Right now I’m using Apollo Twin to record my guitar live into the program, it’s pretty seamless. As far as plug-ins and DSPs, I’ve been using Guitar Rig 5 to process my tones. There are some outboard pedals too from Fender and Line 6, as well as a Helix. I love experimenting with different tones and finding ways to incorporate it into electronics.”

Which of your collaborations are you most proud of?

“I’d say the song [Hero] I just put out with Said The Sky. It came out cool because both of us were looking to move our sounds away from dance synths and include more acoustic and real instruments. You can hear the guitar throughout the entire song.

"I got hit up about the chorus and the drop, people asking how I made it. And basically it’s all guitars, just mixed a dance way! I find that interesting - mixing and treating real guitars more like a synth.

“Both of us are really into mainstream chart music. We’re trying to keep that vibe but mix in more real instruments too. I listen to stuff like Florence And The Machine, Muse and Of Monsters And Men. I’ll listen to all sorts of things.”

Do you ever think you might never have ended up playing venues like Madison Square Garden or Red Rocks, as well as embarking on your own Asian tour, if you’d stuck to more conventional guitar routes?

“Oh absolutely… I don’t think I would have even been able to go full-time into music if I went down the ordinary guitar path. Me producing dance music is what got me into the whole business and then booking my first shows, followed by my first headline tours.

"Going to Asia was something I’d dreamed about for so long. The last few years have been so much fun thanks to incorporating my love of guitar into the dance side of the music industry.”