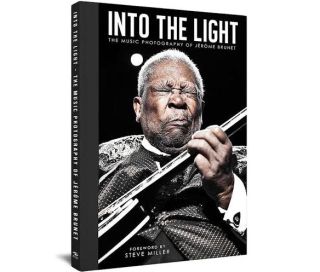 How long have you been shooting pictures of musicians?

I’ve been shooting music for over 20 years now. I started in music long before before I picked up a camera. My mother was classically trained pianist and singer and got me playing the cello at age four. I played for ten years and then switched over to the guitar after hearing Led Zeppelin's first album in high school.

The pictures seem to have a real intimacy. Were most shot from the stage? From the pit? Were you on assignment?

I would say 80 percent were shot professionally in the pit and later, as I created more contacts with the bands, from the stage. I was seldom ever on assignment as I always chose to shoot musicians I admired, which has been the only rule I’ve followed thought out my career!

Your pictures are very vivid and very alive—it's like you hear and feel the music. Is that your goal?

The goal is soul!

Do you usually know when you've nailed a picture just as you've taken it?

Sometimes you feel a special energy in the performance and think to yourself, man did I get that? Other times you only realize it after the fact.

Your book is filled with hundreds of great images. Why did you choose B.B. King for the cover? And why that particular image?

Although my B.B. King shot has gone on to win multiple awards and has been published internationally, the most amazing thing is how the image has gone on to take of life of its own, and seeing people from around the world react so fondly to it that they’d be willing to get it tattooed!

Your images cover a wide array of performers but you seem to have a special affinity for the blues and for guitarists. Is that accurate?

Yes! Led Zeppelin's Jimmy Page was such a huge early influence on me in high school that I immediately researched where it all came from, which inevitably led me back to Robert Johnson and all the blues greats like John Lee Hooker, Muddy Waters and Howlin’ Wolf. Legends like Santana, Clapton, Beck, Gibbons, Iommi, Gilmour and Vaughan came very quickly after that!

Below, Brunet shares some of his favorite guitar-oriented images with us.