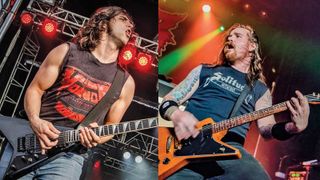 Although Power Trip are constantly whipping metal crowds into a frenzy at clubs around the globe, it’s their 2017 album, Nightmare Logic, that has expanded their fan base far beyond anything they could’ve imagined when they formed 10 years ago in Dallas.

Steered by the streamlined chugging of their catchy-as-hell “Executioner’s Tax (Swing of the Axe)” single, Power Trip have cleaved their way onto PBS and Fox News broadcasts (though they tweeted out a cease-and-desist to the latter). Rhythm guitarist Nick Stewart tells Guitar World that he’s also heard the mid-tempo track pounding through his hometown’s American Airlines Center during Dallas Stars hockey games, among other sporting events.

“A friend works for the Chicago Bulls and was on the air-guitar cam,” lead guitarist Blake Ibanez adds with a laugh. “They played half our song and he’s head banging to it.”

With ears of all kinds now affixed to contemporary thrash’s latest hope, the band are showcasing their back catalog via Opening Fire: 2008 to 2014, a collection of comp tracks and out-of-print vinyl offerings. “With the comp tracks, they tend to get swept under the rug at some point,” Ibanez says.

Opening Fire uncovers Power Trip’s thugged-up hardcore roots on “Lake of Fire,” from 2009’s Armageddon Blues EP, and “This World,” carbon dated back to the band’s first demo, but it eventually works its way into headier metal territory. While both guitarists note that they’ve grown exponentially since their early days, they admit that the gun-turret down-picking of the original “Hammer of Doubt” — recorded for a 2010 comp before being revamped for debut album Manifest Decimation in 2013 — holds up surprisingly well. “I think that version is better than the album version,” Ibanez says. “It’s just hard to re-record a song and do it better. Usually you catch lightning in a bottle. We got the tempo and everything a little better on the first one.”

While happy to give the fans a taste of what was with Opening Fire, Stewart and Ibanez are gearing up for the next armor-piercing phase of Power Trip. Plans for a follow-up to Nightmare Logic have yet to form, but the pair of guitarists essentially have their plan of attack.

“I play the riffs, and he solos,” Stewart says matter-of-factly of his magnetic musical relationship with Ibanez. “There’s nothing fancy to it. It’s just executing it, playing it right. We’re not some kind of flashy, technical band. We just try to do it the right way and not fuck up.”