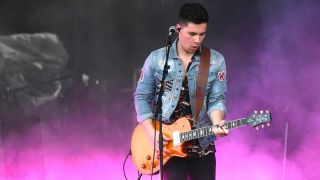 King Calaway are a multinational country band based in Nashville, Tennessee. Breaking onto the scene with their debut album Rivers in October 2019, the group deliver super-tight harmonies and infectious feel-good melodies.

With a super-polished and pristine sound typical of the biggest names in Nashville country, one thing’s clear: these guys are just getting started.

Within the past year alone, the group have enjoyed notable successes other Nashville artists could only dream of, including performances on the Jimmy Kimmel Show, The Late Late Show with James Corden, a stadium show opening for Garth Brooks, and a performance on long-running Australian soap opera, Neighbours.

Lead guitarist Caleb Miller injects tasteful electric and acoustic guitar solos into the band’s inspiring tracks. While the youngest member of the band, he carries precision and emotion in his playing typical of a musician far his senior.

As an endorsee of Paul Reed Smith, Miller opts for a PRS/Vox guitar and amp combo with an awesome array of effects pedals fueling his emotive leads. He takes us through his gear below…

"I bought this guitar from a friend in 2016 and it was the guitar that got me hooked on PRS! It’s loaded with vintage sounding 57/08 pickups that are warm and full sounding, but also split very well to give a killer single-coil sound.

"The neck is a 'wide/fat' shape. It’s a larger neck, but is still very comfortable and is the anchor for the guitar’s full tone. This guitar is perfect for those vintage sounding King Calaway ballads.

"The McCarty Burst finish on the flamed maple tip makes this guitar pop on stage. This guitar has the perfect tone and look, and I don’t see myself getting rid of it anytime soon!"

"The Silver Sky means a lot to me because it was the first guitar that came out of my relationship with PRS. It’s a dream come true being a PRS artist and this guitar marks the fulfillment of that dream.

"The Silver Sky recreated a classic, but in a way that separates it from the rest of the pack. The pickups are 635JM, only found in the Silver Sky. This guitar has crystal clear single coil tones, while also capturing the low end punch of the best vintage guitars.

"When playing a country track or anything that calls for an amazing single coil tone, the Silver Sky is my go-to. I couldn’t do a King Calaway set without this guitar in my lineup."

"This guitar is my Swiss Army knife in my rig. From overdriven modern tones, to vintage clean tones, this guitar does everything. The 594 is loaded with 58/15 LT pickups and are perfect for the King Calaway sound.

"The neck on the 594 is the biggest neck I have in my collection, but gives it the perfect vintage, yet comfortable, playability."

"Over the past few years, I have always gravitated towards the sound of an AC30. The clean top-end tone of this amp pairs perfectly with the full tone of the PRS guitars I play. When putting the right overdrive in front of this amp, magic happens!"

"I’ve had this exact wah pedal for around 6 years and have no intention of changing anytime soon. The sweep of this wah seems to pair perfectly with my playing. This wah has switchless activation, so I soon as I press the toe down, the wah is activated. It’s perfect for any overdriven solos, as well as any clean tone funk-type tracks I use it on."

"I use this signal booster any time I take a solo or want a lead like bumped in the mix. The way I’m using this booster, it doesn’t increase gain, it only boosts the volume."

"This pedal is the first level of my gain. I use the Soul Food very subtly and on the verge of a clean boost. I run it with very little gain and it stays on the entire time I play."

"The BB Preamp is my main drive on my board. This pedal doesn’t take much to get very gritty, so I run it with very little gain. When stacked with the Soul Food, it gives a perfect vintage sounding overdriven tone."

"I use the Paisley overdrive for any modern gain tone that I’m wanting. I will use this in place of the BB Preamp for a punchy drive with great note definition. I use this pedal with more gain than the other drives on my board, just to give a bit of diversity in the set."

"This delay has been a common thread of my tone for many years. I mainly use the classic 2290 setting or the Analog w/ Mod setting. I usually use these settings with a low mix setting, and a high feedback rate. Both of these settings are great for atmospheric tones, as well as adding a touch of delay to overdriven solos."

"The BigSky reverb is another crucial aspect of my tone. For most of my playing, I will have a slight spring reverb. I prefer the sound of the Strymon spring reverb opposed to the reverb built into an AC30.

"I also have a preset where the mix is much higher on the spring reverb, and I will use this for steel guitar sounding guitar parts. When playing with more atmospheric sounds, I will use the Cloud or Swell setting with very high decay and mix settings. The Big Sky is the cherry on top of all of the vintage tone throughout my rig."