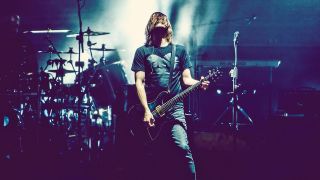 “I think this is as close as you can get to being at one of my shows,” Steven Wilson says about Home Invasion: In Concert at the Royal Albert Hall, a new CD/DVD live album release that presents the British prog-rock master onstage at the famed London venue during his tour for his 2017 album, To the Bone.

Whether in his solo output, fronting the long-running Porcupine Tree or working behind the boards on projects for artists ranging from Opeth to Roxy Music, Wilson has always been known for his sonically expansive and musically adventurous sensibilities. And that trademark approach is all over Home Invasion, which captures close to three hours of live performance with multiple cameras and a mix that presents the music in stereo and 5.1 Surround Sound.

“I’ve been reluctant to do a full-scale concert film in the past because in some respects it’s just not possible to communicate all of that immersive magical quality you get from attending a live show,” Wilson says. “But with To the Bone, because it was such a spectacular show, when the opportunity came up to film it, I thought, You know what? It would be a shame not to capture this for posterity.”

Indeed, the performance presented on Home Invasion is stunning from both an audio and visual perspective, spanning material from much of Wilson’s long career, from pristine renditions of emotive pop numbers like To the Bone’s “Pariah” to intense run-throughs of instrumentally vigorous prog epics like “Home Invasion” and “Regret #9,” both from 2015’s Hand. Cannot. Erase. “You have to have that variation in dynamics and mood and theme and emotion,” Wilson says about the set list.

As for his goal with the stage show, he explains, “The inspiration on that end comes as much from the world of cinema as it does from concerts. So there’s video, there’s film, there’s animations, there’s holograms. I’ve realized over time that this is something you can do with a rock and roll concert — you don’t need it to be just this stripped-down thing.”

In fact, as demonstrated by Home Invasion, it can be quite the opposite.

“Absolutely,” Wilson says. “When it comes to performing live, you can be as ambitious as you want to be.”