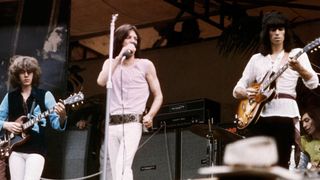 With few exceptions, rock’s best live albums were recorded in the pre-MTV days as a cheap way to give fans a taste of what they missed if they couldn’t get tickets or were busy puking up Boone’s Farm wine in the arena toilets.

Thanks to the albums, you can still visit those days with the help of a little imagination. This time, though, skip the screw-top wine and indulge in some of the best electric and acoustic guitar performances of all time.

10. Iggy and the Stooges - Metallic KO

Metallic KO captures Iggy Pop doing battle with an entire biker gang at one of the Stooges’ final gigs in Detroit. Having baited the gang on a local radio program, Iggy spends the show unsuccessfully dodging bottles, M-80s and shovels - until he’s finally knocked unconscious. But not before he dedicates Cock in My Pocket to his mom. Nice.

Buy Iggy and the Stooges, Metallic KO on Amazon

The Motor City's Madman's second live album features 10 tunes that had never appeared on any of of his previous studio discs - a very cool idea that not a lot of artists attempt anymore.

He played two or three new songs every night of the tour (which was, as the album title suggests, recorded in 10 different North American cities in 1980) and told the crowds that he was recording them for possible inclusion on a new live album of "all new songs." Because they were well-honed after months of being beta tested on the road, every song is pretty much on fire.

39 years later, Nugent is still a road warrior. “I've got the best band on planet earth with Greg Smith on bass and young Jason Hartless on drums," says Nugent, who's currently racking up the miles on his The Music Made Me Do It Again! tour through the end of August.

"They put more energy and piss and vinegar into my music than any guitar player could ever dream of. We are the tightest, highest-energy band in the world, and if that young, 25-year-old Ted Nugent showed up, we'd kick his ass!”

Columbia introduced Jeff Buckley to the world with an EP culled from these intimate live sets, performed at a tiny club in New York where the late Buckley held a residency.

Buckley blows through his early originals, as well as an eclectic clutch of cover tunes, armed with only a budget Telecaster and a serious Robert Plant fixation.

7. Led Zeppelin - How the West Was Won

The Song Remains the Same might include Robert Plant’s immortal ad-lib “Does anyone remember laughter?” but even the band admit the album sucks.

For a taste of Zep’s live glory, delve instead into this three-disc set, which includes a dazzling hour-long version of Whole Lotta Love.

Buy Led Zeppelin, How the West Was Won on Amazon

The quartet from Rockford, Illinois, blaze through their power-pop gems here, with Lennon-voiced dreamboat Robin Zander pausing to inform the audience, “I want YOU to want ME!” Fans the world ’round were quick to RSVP “Yes.”

Ya-Ya’s catches the Stones in their late-'60s prime, with Brian Jones’ replacement Mick Taylor sounding in especially fine form and Mick Jagger teasing the crowd about his trouser malfunction.

Buy The Rolling Stones, Get Yer Ya-Ya’s Out! on Amazon

Smack might have been on Kurt Cobain’s backstage rider by the time Nirvana visited the MTV studios for a filming of Unplugged, but he’d lost none of his fire. Stripped of their grunge-y trappings, Cobain’s tunes stand up admirably alongside covers of classics by David Bowie, Leadbelly and the Meat Puppets.

The day after KISS hit town, in the '70s, study halls buzzed with play-by-plays of the band’s circus-like performance: Gene’s fire-breathing, Ace’s smoking guitar, Paul’s chest hair… You really had to be there, man.

But if you were too sheltered to catch the “hottest band in the land,” this live album was as close as you could get to the real thing without singeing your eyebrows.

This sales juggernaut introduced scads of listeners to Frampton and his so-called talking guitar, with which he asked us, “Do you feel like I do?” And rock fans did… at least until Frampton’s ill-advised follow-up: a portrayal of Billy Shears (alongside the Bee Gees) in a film adaptation of Sgt. Pepper’s Lonely Hearts Club Band. Here's an unrelated video!

At Folsom Prison in the late-'60s, the Man in Black turned the toughest of crowds into, well, a captive audience. Cash, in his prime and backed by a fiery band featuring rockabilly legend Carl Perkins, reaches out to 2,000 inmates with an amazingly empathetic set list. Yet as terrific as it all sounds, this is one gig you can be glad you skipped.