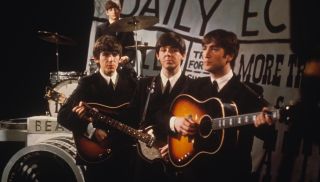 From the acoustic jangle of their debut single Love Me Do, to the soul-searching deep cuts of The White Album, the acoustic guitar was a mainstay in the Beatles' work.

Here, we spotlight 10 of the many standout acoustic moments crafted by the Fab Four.

The Beatles’ 1968 spiritual retreat to India became a prolific songwriting period for the group, who later that year recorded their self-titled double-album or as we know it now, The White Album.

The LP includes the McCartney standout Blackbird, written during the India trip. Performed on his Martin D-28, the song centers on a memorable fingerpicked pattern, originally inspired by a Bach piece.

2. Norwegian Wood (This Bird Has Flown)

One of the Beatles’ most memorable acoustic guitar motifs, Rubber Soul's Norwegian Wood (This Bird Has Flown) includes sitar tracked by Harrison, who at the time had no formal training on the instrument. Along with Lennon's surreal lyrics, it marked a step forward in the band's songwriting development.

One of Lennon's most personal songs, Julia is an acoustic ode to his mother. Featured on The White Album, the song employs a fingerpicking pattern taught to him and McCartney by the folk singer Donovan during the band's India trip.

While the band quarreled over business affairs, Harrison distracted himself by writing this gem. With a universally uplifting message, it’s no surprise that Here Comes the Sun is currently the band's most streamed song on Spotify.

In his book Many Years From Now, Macca explains, “Michelle was a tune that I’d written in Chet Atkins’ fingerpickin’ style. There is a song he did called Trambone with a repetitive top line, and he played a bass line whilst playing a melody.

This Revolver track is celebrated for being the first pop recording with a backwards guitar solo. With Lennon's whimsical musings on his own laziness, it's also one of the best acoustic-driven songs on the album.

This A Hard Day's Night track is anchored by Harrison's four-note repeating riff played on the classical guitar. The guitarists' simple yet brilliant playing - along with Ringo's subtle bongos and claves - gives a distinctive Latin-flavor to the song.

Another White Album track with origins in India, Lennon's Dear Prudence once again utilizes the fingerpicking technique taught to him by Donovan. The song - which includes drumming by McCartney - is written for Prudence Farrow, who had secluded herself for days during the meditation retreat.

9. Till There Was You

A cover of a Meredith Willson number from the The Music Man, this Meet The Beatles! cut showcases a sweetly-sung lead vocal from McCartney. But the song makes this list thanks to a 20-year-old George Harrison's perfectly played classical guitar solo.

One of the most covered songs in the history of popular music, Yesterday was also the first Beatle recording to feature just one member.

Written and performed by McCartney, the melody came to him in a dream, which led him to believe he had mistakenly plagiarized it. The song wasn’t recorded until his band mates assured him that it was indeed his own work.