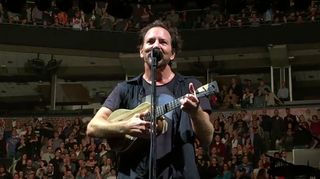 The ukulele. Since it went from a pillar of  jazz to a largely mass-produced plastic instrument manufactured by the  millions in the Forties, Fifties and Sixties, the ukulele has been on  the receiving end of a fair share of scorn from guitarists. This  criticism though, isn't terribly fair.

In defense of the ukulele, we here at Guitar World have collected 10 videos that show the versatility and usefulness of this lovely four-stringed instrument.

Taken from the 1995 Anthology  documentary series, here the surviving Beatles get together on a summer  day at Harrison's house. Harrison, who was a big fan of the ukulele,  leads this casual sing-along of "Ain't She Sweet," a tune the Beatles  performed in their earliest days. A very cool moment to see these  musical giants gathered around a uke.

Racking  up over 16 million views on YouTube—and one of the site's first viral  videos—this clip introduced modern day ukulele virtuoso Jake Shimabukuro  to the world. Since then, the Hawaiian-born musician has become a  living legend of the instrument, and this is the video that started it all.

Israel Kamakawiwoʻole – "Somewhere Over The Rainbow/What A Wonderful World" Medley

A  list of the top ukulele moments would not be complete without Israel  Kamakawiwoʻole. Known to his fans as Iz, the musician passed away in  1997, but his medley of "Somewhere Over The Rainbow/What A Wonderful  World" has become ingrained in Hawaiian culture, living on in countless  films and shows.

Though  he's best known as the frontman for durable hard-rockers Pearl Jam,  Eddie Vedder has always had a huge soft spot for the uke. "Soon  Forget"—a solo uke-and-vocals track from Pearl Jam's 2000 album, Binaural—served as a preview of Ukulele Songs,  a 2011 album from Vedder comprised entirely of just his unmistakable  voice and a ukulele as accompaniment. "Sleeping By Myself" is one of the  album's standout cuts, a beautiful, forlorn track that shows Vedder at  the peak of his songwriting powers.

Hawaiian ukulele virtuoso Taimane Gardner, who has been playing since she was  knee-high to Don Ho, kicks things off in this incredible clip with a  version of the James Bond theme before moving into "Stairway to Heaven"  territory—and well beyond.

Not  only was Roy Smeck extremely proficient on the ukulele, he wasn't too  bad on banjo and guitar either, earning him the nickname "Wizard of the  Strings." Here he's featured in an old film demonstrating a tapping  technique decades before Eddie Van Halen.

While  Brian May is well-known for his homemade "Red Special" guitar, he also  played ukulele or banjolele on some of Queen's campier material—a  perfect example being "Good Company." Taken from the band's breakthrough  LP, A Night at the Opera, the chord progression was written by May during his early grade school years when he first learned to play the uke.

I can  see you rolling your eyes, but unless you've been living in a cave for  the last decade, you've heard this song once, twice, or a few million  times. There's a reason though, that Jason Mraz was able to launch  himself into record-breaking  ubiquity with "I'm Yours." Mraz gets an impressive amount of mileage  out of the song's bright, bone-simple riff, which starts out—as shown in  the live video above—on a uke.

Honoka  Katayama and Azita Ganjali were 15 & 13, respectively, when this  astounding display of ukulele virtuosity was recorded. The Hawaiian  instrumentalists were named MVPs of the 2013 International Ukulele Contest in Honolulu and—from the video above—it's easy to see why.

You  can definitely be forgiven for not immediately thinking "ukulele" when  the Jimi Hendrix, "Voodoo Child," comes up, but this video may change  that. Here, ace ukulele player James Hill manages a very faithful and  convincing "Voodoo Child" cover with just his ukulele. Makes you wonder  what Hendrix would've done with a ukulele in his hands...