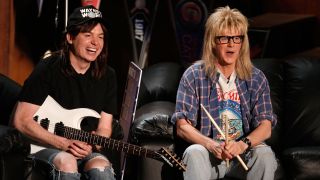 But what's a guitar player to watch when documentaries get too heady and most modern musicals neglect our favorite instrument?

Believe it not, there's a plethora of mainstream Hollywood pictures to sate the guitarist's cinematic appetite. Some are high-brow works of genius. Others are just barley watchable. And some ... well, you can be the judge of that.

Below are 10 great rock 'n' roll movies. Or at least the ones that put big, goofy smiles on our faces, intentionally or not. Note that this list does not include documentaries, musicals or concert films. We're talking actual movies with actors and scripts and high-strung people like Ari Gold working behind the scenes. Enjoy!

It might contain the origin of Jack Black and Kyle Goss' meeting and little more than the duo's typical Dio-inspired shtick, but it's worth the price of admission just to see KG with long hair. And Dio. Anything with Dio is worth watching.

The original was all about Wayne Campbell and Garth Algar's Cable 10 Public Access show, but Wayne's World 2 gave the world Waynestock, at least for its 95 minutes of running time. More than the climatic appearance of Aerosmith at the movie's close, Wayne's World 2 offered a jocular but not entirely inaccurate look at the work involved in major music festivals. It also tips its hat at the erstwhile cliches of Seventies arena rock. And Christopher Walken wails on guitar.

This lesser-known film attempted to break Michael J. Fox out of the slacker image he'd developed in Back to the Future. Fox's character, Joe, is a local Cleveland rocker, but he's more interested in being a role model for his nephew, whose mother, played by Joan Jett, neglects in favor of music.

The film is awash in Eighties sentimentality but offers some decent performances, including a cover of Stevie Ray Vaughan's Rude Mood.

It's true: Anyone who's watched more than five episodes of VH1's Behind the Music could have written the script to this film. It is fundamentally a collection of rock 'n' roll stereotypes and urban legends. But Judas Priest fans will appreciate the obvious references, and it's got Zakk Wylde in it. Need a better reason to watch? How about this: It's got Zakk Wylde in it.

The list of cameos in John Landis' seminal 1980 film is a bonafide who's who of American roots music. And in astounding professional form, not one performance was phone it. From John Lee Hooker's Boom Boom to Aretha Franklin's Think, every tune is a showstopper.

They tried a sequel years later, but one can tell from the dynamic interplay of Dan Ackroyd and John Belushi that this was a once-in-a-lifetime flick. Orange whip? Orange whip? Three orange whips!

If you're looking for a movie that adequately captures the burgeoning Seattle grunge scene, look no further than Cameron Crowe's Singles, which features cameos by Alice in Chains, Pearl Jam and Soundgarden.

Woody Allen fans unfamiliar with the work of legendary jazz guitarist Django Reinhardt got a crash course in the Manouche gypsy-style guitar that the Belgian-born musician helped pioneer in the Thirties.

They also got a stunning performance from the capable Sean Penn, who aptly demonstrates the effect elegant guitar playing can have on the opposite sex.

If overblown, self-possessed rock 'n' roll needed a savior, it found it in Jack Black. Though this film could have been padded off as warmhearted, kid-friendly cash cow, School of Rock... well, rocks!

Black is actually funny in his initial vain attempts to translate the finer points of rock 'n' roll hedonism upon a group of adolescents who have been spoon-fed manufactured pop. Then there's the climatic performance at the Battle of the Bands that perfectly meshes all of JB's not-so-subtle influences.

You don't need to play an instrument to get this movie, though anyone who's ever worked in a professional band will tell you: it all really happens. Impossible to watch only once - you'll miss at least 50 percent of the jokes - This Is Spinal Tap is the original rockumentary worth multiple viewings, if not for fun than for guidance (or warning) of what to expect if you want to be in a working band.

This is the guitar player's movie. It has everything: a historical blues context, neo-classical shredding, a head-cutting guitar duel - and Steve Vai. In fact, what are you doing reading this? Go watch Crossroads.