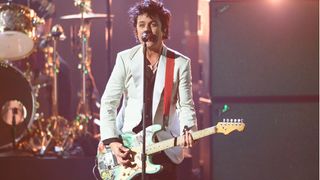 There are few players in punk who wield an electric guitar like Billie Joe Armstrong. He's rocked them, he's smashed them, he's even had them custom-built only to give them away to fans onstage.

He's had his share of signature models. But which guitar do you think of when you hear Billie Joe's name? Is it Blue, the Fernandes S-style that was with him since the early days, since before the early days? Or is it the Gibson Les Paul Junior?

You could argue that Billie Joe Armstrong single-handedly brought the Junior back into style, with Gibson launching a signature model in 2018 to consecrate this feat.

Maybe it is all of the above and more. The funny thing about a player's guitars is that you can tell the story of their career through them. That's why number one in our top five Billie Joe guitars just had to be "Blue."

One of the most iconic guitars in punk-rock history, ‘Blue’ was a gift from Billie Joe’s mum on his 10th birthday.

It appeared in most early Green Day videos, including Basket Case, Longview and Welcome To Paradise, as well as countless tours.

Since its beginnings as a Fernandes Strat copy, it’s had the neck and middle pickups disconnected and the bridge pickup changed to a Seymour Duncan JB humbucker.

For American Idiot, Armstrong reinvented his guitar sound, switching from Blue to primarily Les Paul Juniors. The raw, spiky sound of P90 pickups propelled some of the angriest lyrics Green Day had recorded to date.

His white Junior is immortalised on the Bullet In A Bible live DVD, featuring Green Day and 130,000 of their closest friends. Billie Joe also used a pair of 1950s Juniors, each worth more than the entire recording budgets for Green Day’s first two albums.

In 2018, Gibson launched a guitar with elements of both Blue and the Billie’s signature Les Paul Junior. The single humbucker threatened a return to Dookie-style beefier tones, while keeping the look and playability Armstrong has favoured since 2004.

The finishes were a nod to Green Day’s 50s rockabilly influences – maraschino cherry, ebony and (of course) sonic blue.

The guitar itself isn’t special – based on a Blackout Telecaster, it has a custom scratchplate and a Duncan JB. Green Day’s tech has built dozens of them as backups for Blue.

What’s cool is that Billie Joe keeps giving them away. A quick YouTube search turns up videos of fans being invited on stage to play with the band and going home with one of these Teles. Now that’s punk rock!

The TV yellow Les Paul Junior doublecut is infamous mainly for its destruction at the 2012 iHeartRadio festival.

On learning that Green Day only had four minutes left to play, an aggrieved Armstrong launched into a spectacular rant before taking vengeance on his undeserving Gibson.

Videos of the event quickly went viral online. In the aftermath, Billie Joe checked into rehab, his tech rebuilt the guitar, and Gibson’s shrewd marketing department spied the opportunity for a new signature model.