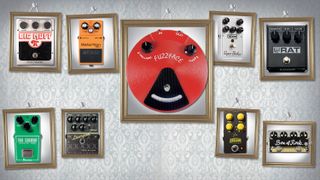 If there's one thing that every guitar player loves, it’s cranking up the gain. While overdrive, distortion, and fuzz all affect the signal in the same manner in theory, there are some pretty massive differences between them.

They all work by “clipping” the signal, altering the waveform to produce a specific sound. Lighter clipping is called “soft clipping”, which tends to be more on the overdrive side of things. “Hard clipping” is more extreme, with the waveform becoming even more compressed and eventually turning into a square wave.

Fuzz pedals go all the way back to the early 1960s. They were invented as a way to simulate recording console saturation. Just as well, in that era many amps didn’t even have master volume controls – so you really had to crank them to get them dirty. Fuzz pedals were an answer to that, providing increased gain without necessarily needing the deafening decibel levels.

Overdrive pedals were a natural evolution from there, providing a different style via soft clipping – more like what an amp does naturally when it’s really driven. Distortion pedals take it even further, using hard clipping.

In this article we’re looking at five types of drive pedal that every guitarist should have in their arsenal, what makes their DNA a little different than the others, and some suggestions that are affordable and easy to find.

Some players aren’t looking for a drive pedal that will totally reshape their tone, but might be looking to enhance what’s already there. Enter the world of ‘transparent’ overdrives.

The craze began in the ‘90s with the Klon Centaur – a pedal that has now achieved a status as mythical as its namesake beast. It was revolutionary. This was an overdrive pedal that provided all of the sparkle and crunch without too much compression, and was more of a tonal augmentation than a total replacement. Transparent overdrives do exactly what the name implies – adding gain to the signal without significantly altering the baseline sound.

For a while, there were very few options (at least affordable ones) when it came to this style of overdrive, and while the circuit was kept a tight-knit trade secret, eventually other manufacturers started innovating their own designs. The Timmy by Paul Cochrane is another amazing option that has a boutique vibe without the price tag and isn’t really hard to find.

The Electro-Harmonix Soul Food is probably the most accessible, and there are even mods that can be done to enhance the circuit to be even more true to its inspiration.

IC/Op-amp based overdrive and distortion

In 1979 Ibanez released the most infamous overdrive pedal of all time – the Tube Screamer TS808. The guitar world would never be the same. Many players choose to use this style of overdrive pedal not just for dirt, but to hit the front end of the amp harder. Make no mistake, while they are great for boost there is also a healthy amount of gain on tap.

Many attribute the legendary status and versatility of Tube Screamer-style pedals to the JRC4558 chip used in the original 808s from the 1970s and the earlier TS9s from the 1980s. The tonal signature of a Tube Screamer is the “mid-hump” that is inherent to the circuit design. This accentuates the mid frequencies, right where the guitar lives. They integrate well into any type of rig, and complement the mid-scoop of single-coil pickups beautifully.

There have been many variations over the years, but most agree that the original TS808 (and subsequently, the TS9) is the pinnacle variation. The pedal was so revolutionary that most “boutique” overdrives are built upon its foundation, with each manufacturer adding their own tweaks and features. If you’re looking for an all-in-one Tube Screamer that spans decades of the design, look no further than the JHS Pedals Bonsai. It includes a rotary switch so you can select between pretty much every variation in existence. Very cool.

The other most notorious op-amp drive pedal is the ProCo Rat. The LM308N chip is what gives that Rat its bite, and it’s another circuit that has spawned countless clones and boutique reboots. It sounds far different from the Tube Screamer, with a heavier gain structure that rides the line between distortion and fuzz. The versatility of the circuit makes it also work with any rig setup, and just like the Tube Screamer it stacks well not only with other drive pedals, but pretty much anything you throw at it.

Over the past decade or so the “amp-in-a-box” idea has really taken off. These pedals have circuits designed to specifically emulate the characteristics of a particular style of amp, allowing you to access different amp tones with a simple click. They can get the sound of classic amps in a compact and mobile package without having to lug around multiple amps.

One of the first companies to go in this direction was Tech21 with their Sansamp – a staple of the studio and stage to this day. Subsequently they released the Character series, a line of pedals dedicated just to this concept, with offerings that cover all of the most beloved sounds – Marshall, Vox, Fender, and Mesa Boogie.

These types of pedals come in all formats, ranging from circuits that are designed to approximate the sound of the amps they’re modeled in a simple stompbox with a few knobs, to full-on digital recreations with insane feature sets that even the real amps don’t offer. To make the sound even more representative of the real deal, some include cabinet modeling and impulse responses, allowing you to get even closer to the authentic sounds of micing an amp and cabinet.

The technology continues to improve with pedals like the Strymon Iridium, which might be the most full-featured amp-in-a-box available in a pedal format. It offers fantastic recreations covering the big three of guitar amplifiers – Vox, Fender, and Marshall. It also comes loaded with a number of fantastic cabinet models and impulse responses.

Renowned amp maker Friedman brings some of their most famous amps to your pedalboard with their line of pedals, and products like the Fractal Audio Axe-Fx and Kemper are the next generation of the idea.

Considered the first ever distortion pedal, fuzz pedals came about with the inception of the Maestro Fuzztone in the early ‘60s. The rights were purchased by Gibson, and they sold Fuzztones under the original brand name. The guitar pedal industry was born. Even though the circuits are fairly simple, there is a surprising of tonal versatility in the fuzz world.

While there is definitely an identifiable characteristic to fuzz, there are a number of great pedals that push the boundaries of what a fuzz can do. Some circuits are more gated or compressed, some are choppy and some are smooth.

The JHS Muffuletta packs six different types of fuzz into a small footprint enclosure, making it an incredibly versatile addition to your pedalboard, if you want to fuzz things up. The Dunlop Fuzz Face is based on the effect made legendary by Jimi Hendrix and has a more open sound than EHX’s Big Muff – both still widely available.

We’ve intentionally left this section a little more open-ended, as the term “distortion” is really subjective. It generally refers to pedals that provide more gain via harder clipping than overdrives. Distortion pedals themselves are as varied as the definition of the term.

Most distortion pedals use a hybrid design of op-amps (ICs) and diodes to achieve clipping, but the industry is rife with new designers breaking the old molds. They are highly versatile pedals with a usefulness in any genre of music.

There are higher gain pedals that are thick and compressed, great for metal and heavier styles, like the Wampler Triple Wreck. There are also more open-sounding distortions that are better suited for rock, pop, and blues like the MXR Super Badass – which basically puts a decade of Marshalls (1970s) at your feet. Additionally, a lot of amp manufacturers are now releasing distortions based on the tonal characteristics of their heads, like Bogner and Blackstar.