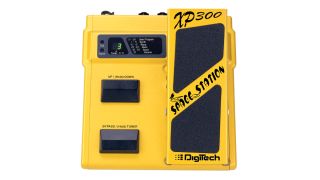 Hot on the heels of the success of the Whammy II, DigiTech decided to invest in a larger product line-up of expression-based effects - the appropriately-named ‘Xpression’ series.

There were four pedals: the XP-100 Whammy/Wah, the XP-200 Modulator, the XP-300 Space Station and the XP-400 Reverberator. Depending on the model, you had between 30 and 50 presets to choose from on the pedal. All of these had in common that there were no user-controllable elements of the preset sounds apart from a single parameter per patch, controlled by the rocker pedal.

In terms of sounds, the Space Station lives up to its name. Some of the highlights include patch 2 (a shimmer reverb with fifths added), 22 (a broken-sounding digital delay), 28 (a sample-hold arpeggiator that you can speed up or slow down), as well as the various arpeggiators above 30.

The most fun has to be 10, the reverse mode. Pushing the rocker down slows down your guitar signal, stops it, and then starts replaying it backwards. It’s glitchy and doesn’t track well, but it’s one of the coolest expression effects ever.

The Space Station is now incredibly rare, but, by virtue of the XP-200 and XP-400 having the same internals apart from the chip which contains the presets, it’s possible to get one of the less sought-after pedals and mod it into a Space Station.

BANK UP: This control moves up a preset.

BANK DOWN: This control moves down a preset. Pressing both switches engages bypass, but it can be fickle, meaning that live, your best bet is to put the XP-300 inside a loop using a pedal like the Boss LS-2.

FOOT PEDAL: On every preset or patch there's a variable parameter that is controlled by this rocker.

INPUT TRIMPOT: On the rear of the pedal, there’s an input trimpot that allows you to change the input level. The pedal isn’t true bypass, and its circuitry does color your sound, so it pays to adjust this until it’s right for your guitar and amp setup.

The EQD Rainbow Machine, the standard bearer for ‘weird’ pedals in the mainstream, harks back directly to a number of the pitch, glide and arpeggiator modes on the XP-300 with its dreamlike, shredded delay lines.

When initially announced, Red Panda claimed the Tensor was inspired by the warp time modes from the Space Station and was intended for guitarists that wanted to remove the fragile and rare pedal from their boards. It doesn’t quite have the magic of the XP-300, being a bit too clinical and less expressive, but it’s a good attempt nevertheless, and an interesting pedal in its own right.

In many of the OBNE Coffee & Riffs videos, an old Space Station can be seen among their test pedals in the shop, and that’s hardly surprising given their innovative and often oddball pedal designs. The Dark Star is a shimmer reverb with a momentary infinite feedback mode, which isn’t a million miles away from some of the pitch-harmonized reverbs on the Space Station.

It’s a well-known trick to run reverb into drive in order to create muddy, compressed washes of sound. Pulling the same trick with the fifths reverb on the Space Station results in a roaring hurricane of noise fit for any shoegaze band. Although it’s a bit glitchy, the tracking is good enough to play chords with.

The somewhat erratic tracking and smooth swells of the reverse mode mean that, when paired with some chorus and a Jazzmaster tremolo arm, you can make weird, glassy chords using the top three strings. Add some drive and you’re into the sort of tonal territory that Kevin Shields would no doubt approve of.

If while playing a solo you move the rocker expressively like a wah pedal, you will get often unpredictable results. A neat trick is to ‘park’ the pedal at 3/4 open, play a flurry of notes and then fully close the pedal. The effect is a little like a jammed tape echo becoming unstuck, with a slew of notes suddenly sounding.