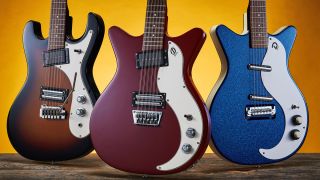 Ol' l’ Bill Shakespeare once famously wrote, “To thine own self be true.” The meaning of this quote, as first spoken by Polonius to Laertes, has been debated endlessly, but perhaps someone at the Danelectro woodshop has fathomed it.

Take a look at the Danelectro line-up of this or any other year and you would be hard pushed to find a manufacturer with a better sense of what it is all about, what its guitars should look like, how they should sound.

This month’s test is a three-way shoot-out between a '64XT doublecut with tremolo, a sparkly 60th Anniversary DC 59M NOS+ and a 12-string shorthorn 59X12. Each sports a ‘Coke bottle’ headstock and a vibe that’s 100 percent genuine retro Americana. Danelectro is often cursed with bad adjectives, such as ‘quirky’, which doesn’t really work because it fails to take the Dano magic seriously enough.

The Dano magic is important because it gets at something fundamental about the electric guitar. Maybe it’s about being cool. It is definitely rock ’n’ roll. These Danelectro electrics all have it. They’ve got the vibe. “To thine own self be true.” Couldn’t have put it better, Bill. Now, Laertes, where’d we put that fuzz box...

The 60th Anniversary DC59M has got its disco-face on with that sparkle finish. But it is rock 'n' roll all over.

The stacked volume and tone controls can be a touch awkward for swells and what not but nonethless look pretty neat.

The NOS+ (New Old Stock) Lipstick singlecoils really come alive when you put a bit a fuzz in your signal.

The 60th Anniversary DC59M comes in a choice of silver or blue MetalFlake finishes, which might be too disco for some, even for birthday celebrations. But then those people could always plump for the DC59M NOS+, which comes in black to best serve their fantasy that they’re actually Jimmy Page, the tune is Kashmir, and they’re standing atop the stage in some Midwestern enormodome.

Whatever, it’s all a matter of taste. Either way you’ll get the famous Danelectro construction, Masonite on the top and bottom with inside frame that gives the DC59M a lightweight homemade feel.

When you pick it up and plug it in, it soon gets serious. This guitar might be fun with a price to match, but there are few rock ’n’ roll contexts, professional, amateur or somewhere in between, where it doesn’t make perfect sense. This is ready for the studio or stage.

There are a pair of NOS+ (New Old Stock) Lipstick singlecoil pickups in the bridge and neck positions that really nail vintage rock tone. They are pleasingly quiet, work well with some dynamic overdrive or fuzz, and are tonally well-balanced, with solid lows, plenty of midrange punch and a real snap to the high end. The aluminium nut must help transfer some of that brightness.

There’s a three-way selector and two stacked controls with the inner white control handling tone and the outer black control handling volume. It’s a neat touch visually, but can get in the way when playing, especially with the volume taper requiring a fairly wide turn of the knob for swells and so on.

There’s a noticeable spike in volume in the middle position, too. But these foibles are soon forgotten, such is the playing experience.

The maple neck is bolted onto the body with a blocky heel and yet is so svelte that it accommodates noodling anywhere on the fretboard. This will handle blues, rock, grunge, country, punk... Dial in a little slapback tape echo, some spring reverb, and you’ve got rockabilly twang that’s thicker than pomade. It is is truly a rock ’n’ roll machine.

Transplanting the 64XT’s pickup and switching configuration to the Shorthorn doublecut body of the 59 models, the 59X12 has a reassuringly familiar setup, all the better for investigating its octave-forward 12-string voice.

An electric 12-string is by its very nature a strange beast. In recent times we’ve seen Fender’s Electric XII resurrected, complete with cartoon headstock and split-coils. The 59X12 offers something different. The bridge humbucker has a thicker, punchier voice. As with all these Danos, there is plenty of treble, that brightness again enhanced by the aluminium nut.

You can be as fastidious as you like with the tuning and intonation and yet when you dig in there’s that natural chorusing effect; when using with any sort of overdrive it is a heady mix. Shoegaze players would love layering gain and some fuzz over the top and letting the harmonic overtones work their magic.

On single-note rockabilly lines, the 59X12 sounds incredible with some slapback echo and reverb, the overtones contributing to the rumble, but it’s when you’ve got this running clean and letting those notes collide and bleed into each other that it comes into its own. Engage the coil-tap and you can go full-on jangle a la the Byrds. You could lose hours messing around with that oversized neck singlecoil, and that’s before engaging the pedalboard.

There’s a psychedelic quality to electric 12-strings before adding effects, but stepping on an old orange box phaser and you start to worry less about the odd bum note and more about that acid flashback taking hold. It can feel a little neck heavy; there is a lot of metal on that headstock, but again that Dano slimline bolt-on neck is so easy to get to grips with.

If we had other gripes it would be that the controls being a little hard to grip for engaging the coil-tap. But this is certainly no deal-breaker. At this price, the 59X12 presents good value, and it’s seriously tempting to have it as an option to complement your six-strings. All studios should have one. All players should make its acquaintance at some point in their lives.

When it is time for something completely different, it might well be time for Danelectro’s ’64XT. Rocking a sort of reverse doublecut Mosrite body shape, with a big oversized singlecoil off set at an angle in the neck position, and a double Lipstick humbucker in the bridge, the ’64XT exists way outside the Strat/Tele/off set continuum.

It has a vintage pawnshop look, old-school tone, but it has the modern player in mind. This is a hugely tweakable, high-functioning electric dressed to look like an oddball. The coil-tap on the tone control offers a singlecoil voicing of the dual Lipstick humbucker, with all the lively mid-high twang that entails.

In its natural humbucker mode, you’ll find plenty of chewy attitude, not necessarily super-hot but with enough hair to tease some gnarly breakup from your amp. It partners overdrive well, loves fuzz, and if you like to play in the styles of Ron Asheton or Johnny Ramone you’ll find all the power you need.

But what of more subtle tones? That’s where the tone controls and neck pickup comes into its own. With the tone control’s taper offering a wide sweep you can get some really cool nasally tones when overdriven, and warm spangly cleans that work really well for blues and rock ’n’ roll, inviting experimentation with time-based effects.

With a guitar that doesn’t look like it fits in anywhere, that invitation is open-ended for those players looking to take their sound into bold new directions. Roll back the treble and you can do jazz if that’s your bag, too, and the neck, slim as per the DC59M, has all the zip you need for fast, note-heavy runs.

The Wilkinson tremolo is perhaps a little modern, where a vintage two-point version would have been more appropriate. It’s not quite like watching Happy Days and seeing the Fonz wearing an Apple Watch but it’s kind of anachronistic. It is, however, stable, well engineered, and gives up plenty of wobble without throwing the whole shebang out of tune.

We’ve got ubiquitous Coke bottle headstocks, Masonite builds and bolt-on maple necks with the most rudimentary of heel joints throughout. The South Korean factory has lost nothing in translation in bringing a real feel of American rock ’n’ roll to the collection. How to choose?

Well, first, there is an obvious outlier, the 59XT12. It is a specialist instrument, perhaps too weird form the majority of players to consider for their number-one guitar. We love having an electric 12-string with both singlecoil and humbucker voicings in the bridge; allied to the neck pickup, there is a lot of room to play with.

This setup suits the ‘64XT well, too. And this is the one if you are looking to cover all bases, if you’re searching for a sound and need the thicker growl from humbucking pickups, and of course a tremolo. Danelectro say it’s the best-sounding guitar they’ve got. Maybe they're right.

But it is hard to see past the 60th Anniversary DC69M.  The NOS+ pickups are incredible, with a voice that belies their size, and this is exactly the kind of guitar that does not hide anything from the player, the kind that makes you a player better – and it will handle rock of all ages.

As with all Danelectro models, if you see one you like, grab it, because they often switch up their lineup. That’s a bummer. But these are priced to facilitate impulse purchases, and with rock ’n’ roll guitars it’s alway best to go with your gut.