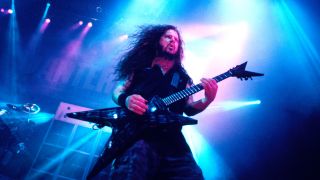 If there’s one metal electric guitar player that had it all - the scorching leads, the game-changing riffs and crushing scooped-mid tones - it’s Dimebag Darrell. Tragically, the Pantera legend was killed onstage in 2004, but his music lives on and influence is still felt in every corner of the globe to this day.

Perhaps one remarkable aspect of his tone was that he preferred solid-state amps to tube-driven ones for the majority of his career - going against trends and following his own sonic calling. Then, of course, was the bridge pickup in his Dean guitars, Dimebag himself once describing the Bill Lawrence L-500-L as the key to his sound.

So, if you’re thinking of heading down that Texan groove metal route, here’s everything you need to know…

“My main guitar is still my blue ’81 Dean with the Kiss stickers,” Dimebag told Guitar World in 1994, for a cover story around the release of Far Beyond Driven. “That guitar just can’t be topped. I use that on all the songs that are in standard tuning. When we tune down to D, I use my brown tobacco-burst Dean.”

Though he played a number of Deans across the years – and some Washburns while the company was inactive – that blue “Dean From Hell” ML seen on the cover of their major label debut was very much Dime’s instrument of choice.

Dean USA Dime ML Far Beyond Driven Limited Edition - $3,299
Though easier to track down in its left-handed form than right-handed, this limited edition Dime ML made in the Tampa Custom Shop is still available. It features a set mahogany V neck shape, Ebony fingerboard, an Original Floyd Rose Top Mount tremolo system with mixed chrome and black hardware, and comes loaded with Seymour Duncan SH-6 neck pickup in the bridge (as Dime had on his original Far Beyond Driven ML) and a DiMarzio Super Distortion in the neck.

Dimebag ‘Dean From Hell’ - $749
As well as boasting the same lightning graphic as Dimebag’s no.1, this more affordable option doesn’t hold back on features. There’s a sleek, set mahogany neck with pau ferro fretboard, a Floyd Rose Special bridge for those dive-bombs, plus some high-powered pickups – a ceramic Seymour Duncan SH13 Dimebucker in the bridge and a Dean DMT Design in the neck.

Sadly, Dimebag was never seen on stage with this modified version of the ML he co-designed with Dean in the months prior to his death, and the series was released posthumously.

And by using them at one stage or another, legends such as Zakk Wylde, Matt Heafy and even Eddie Van Halen, have paid their own tribute to the man born Darrell Lance Abbott.

Dean Razorback Lightning
The Dean USA-made Razorbacks are pretty hard to come by, so this version copying his infamous lightning graphic is definitely worth a look. You get a mahogany body, a set neck construction, a three-piece mahogany neck and a 22 Jumbo fret Pau Ferro fingerboard. It’s all topped off with Seymour Duncan Dimebucker in the bridge and a Seymour Duncan 59 in the neck, as well as a Floyd Rose 1000 series tremolo system.

Dean Dimebag Razorback - $349
At the more entry level of the market, there’s this Razorback finished in Classic Black. There’s no floating bridge, but you do get the stability of a tune-o-matic bridge and Grover tuners. Other welcome appointments include two high-output Dean-designed humbuckers and a pearl razor inlay on the 12th fret.

On Cowboys From Hell and The Great Southern Trendkill, it was a Randall RG-100ES driving Dimebag’s Dean guitars. For Vulgar Display Of Power and Far Beyond Driven, he used the Randall Century 200. Even though he would switch from solid-state to tube for his post-Pantera project Damageplan, striking a deal with Krank for his own Krakenstein signature, the Randalls were his preferred amplifier for the classic years.

“Solid-state to me is more in your face, while tube sounds like it’s surrounding your body,” he told Guitar World in 1994. “I’m not going for a soft sound. I ain’t lookin’ for a warm sound. My sound is warm, but I don’t need tubes to do it. The Randall RG-100 is the best amp for what I do.

"To this day, when people find out that I use solid-state they’ll come up to me and go, ‘Are you sure? That sounds like tubes, dude…’ The Randall has the warmth of tubes, but it has the chunk and the fuckin’ grind right in your face!”

Diezel VH4 - $4,399
Granted, it’s not a solid-state amp, but the VH4’s versatility and overall musicality has made it virtually the best high-gain amp of all-time. The mids can be dialed back for a scooped sound a la Dimebag, even more so with a six-band EQ like the man himself used, but there’s also so much more it can do… Which explains why it’s been a main go-to for bands like Metallica, Tool and Muse.

Randall RG1003H - $329.99
This modern solid-state Randall stays true to the models used during Pantera’s glory years – offering three channels, copious amounts of gain, spring reverb, a headphone out and an effects loop for not much at all. Best of all, amps of this ilk tend to be much more sturdy than anything tube-powered, with less to go wrong.

DigiTech Whammy - $329.95
If you’ve ever wondered how Dime made his guitar screech on the main riff in Becoming, he used a Whammy pedal to pitch-shift up two octaves. “I depress it on the third beat of every other measure to produce what Phil [Anselmo, singer] calls the ‘step on the cat’ effect,” he told Guitar World in 1994, praising the pedal’s ability to “produce a sound that was completely fucked up!”

Dunlop Dimebag Wah DB01 - $159.99
The original Dunlop Cry Baby is the best-selling wah pedal of all-time - but some might say it’s not the most exciting pedal to look at. Thankfully Dime’s signature Cry Baby From Hell comes with a CFH logo in a military camouflage finish. And there’s more – thanks to its extended sweep for more lows and highs, a fine-tune knob, a side-mounted 6-way frequency selector, and a switchable boost with LEDs to indicate wah and boost status.

MXR DD11 Dime Distortion - $75.99
Shortly before his death, Dime was working with MXR on his own distortion pedal. The idea was to recreate his solid-state Randall distortion in a pedal format, with a three-band EQ and scoop switch to cut mids. So, regardless of what amp you’re given, here’s a pedal purpose-built for The Art Of Shredding.

MXR Six Band EQ - $89.99
Before his signal hit any amplifiers, Dimebag would use a graphic equalizer to shape and boost his sound - sculpting a tight low-end and scooping the mids even further. This updated version from MXR has its six sliders ready to deliver 18 dBs of cut or boost wherever needed just like Dime’s old one.

Universal Audio MXR Flanger/Doubler Plug-In - $199
The long-discontinued MXR Flanger/Doubler analog processors are pretty hard to come by, but thankfully Universal Audio have created an officially Dunlop-licensed plug-in.
Dimebag only used the Doubler function and it was as his ‘always-on’ effect to deepen and thicken his sound while still retaining all the tightness. The TC Electronic Mimiq would be a good pedal alternative.

You can take your Dime worship even further with this signature Hi-Voltage set made by DR Strings. The company’s website quotes him saying, “I've been playin’ the strings of strength since 1995. I like the way DR Strings feel and the way they react, you can really get a grip on them.

"They’re great for everything, from big ol’ string bends, to huge whammy bar dives, perfect for blood curdling harmonic screams and just straight out heavy chunky riffin’. They also stay in perfect tune and remain fresh and bright for an amazingly long time."

For those wondering, the original Cowboy From Hell would use gauges 9-42 for standard tuning, 9-46 for dropped-D and 11-50 for the lowest tunings.