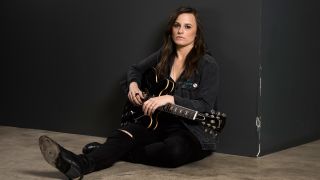 As you would expect of any blues-rock player out of Austin, Texas, Emily Wolfe’s electric guitar tone has a whole heap of sizzle. But don’t expect her self-titled debut album to ease into a boilerplate 12/8 shuffle.

Wolfe laces the blues with a pop sensibility gleaned from the Billboard Top 100. It’s a heady combination, a sound that saw her at home sharing stages with the likes of of Heart, Gary Clark Jr. and the Pretenders following the release of her 2014 EP Roulette.

A couple of singles followed, but her debut album is a long time coming. It saw her head into Portside Sound in Muscle Shoals, Alabama, to record with producer Ben Tanner (Alabama Shakes) before finishing the recording in Austin. Evan Nicholson on bass and Clellan Hyatt on drums rounds out her lineup, the power trio format affording her guitar plenty of space to fill, which she does courtesy of a cornucopia of gain pedals and an Epiphone Sheraton, and one of the most effervescent rhythm tones around today.

As she explains here, gain is all a matter of taste, rock 'n' roll a practice that's best left raw and alive...

It sounds like you make room in your arrangements for for improv. Do your songs change much when you play them live?

“They do. In the live show I like to extend guitar solos. The live show is mostly about jamming. There are some songs that will stay true to the arrangement from the record but a lot of them it’s, y’know, just playing guitar solos – it’s great fun. I love pop arrangements so much, and I like for my songs to be arranged that way, then live they are there to do whatever I want with on the guitar.”

What is the essence of the authentic rock ’n’ roll experience? Does it lie in that freedom to break the structure of the song in the moment?

“Yeah, I think that is what’s exciting about playing live for me. I don’t know where I am going to go with it. If I get there, that’s like the best feeling, and then if I miss a note it’s like losing a level in a videogame. I come back. I can make something else up. Something else that sounds kinda weird. So that is an adrenaline rush for sure. But the rock ’n’ roll experience to me is just making stuff up on the spot and seeing how cool you can make it.”

Exactly! Embrace mistakes and happy accidents alike. Do you have a visual shorthand with the band?

“We’ve been playing together for about four years and my drummer and I give each other a look. If I want to do a longer solo I’ll just turn round and give him one of these [raises eyebrow] and then my bass player and I are so musically locked in together that we just know where the other is going to go inherently, so it is a lot of fun to play with those guys because we are very keyed into each other and listen to each other.”

“Yeah it’s body language and eye contact; that is the thing. It’s the key to keeping my live show where I want it to be. The guys just know what a certain level of eye contact looks like and what it means. If I’m like that [cocks head] . . . A lot of times I’ll go in and I’ll accidentally mess-up, quote-unquote, and then I’ll look over at my drummer and he’ll give me a look and we’ll get back on the same page and that’s fun too. That’s fun in itself, just figuring out what the other person is thinking.”

“I hope so. Oh, yeah. I think that’s something I love, too. I’ve got an outline of what I want the show to be and then having solos made up on the stop, and if they are really cool then that is the best feeling. It’s like, ‘Oh my god! I landed this!’ It’s not planning a lot. That’s what I like about the Grateful Dead and a lot of ‘70s prog-rock band. They just go off the rails a lot in their live shows. Thin Lizzy has got the hits, y’know, but then they’ll do whatever they want live.”

The process for recording your album sounded similar. You had a plan, worked on it, then played around with it...

“Yeah we did a lot of preproduction. I did a whole bunch of studying about what mics I wanted to use and the acoustics of different rooms, and the sound of different woods in rooms, ‘cos like I guess you would call it environmental acoustics but the studio that I recorded in – there were a couple of them – there were wood ceilings, and in the taller ceilings I felt the drums should go there. I just played with my surroundings and made a couple of my own mics.”

You made your own mics?

“Yeah, it’s actually not that difficult if you know how to solder. You take a speaker out of whatever you want, and then you take an XLR cable and strip the wires, and then you just solder the ends to the speaker and instead of pushing messages out, it receives messages. It’s really good.

“I had a really horrible speaker out of this record player, and I took that out and I made a mic out of that. And then I had a really bad amplifier that I took the speaker out and made a mic of that – and it ended up sounding like a [Yamaha] SubKick or something like that. I just got really deep into making sure I had the tones that were in my head no matter what it took, even if it took a week of studying a certain mic or figuring out which guitar pickup would go the best with what effects pedal and amp.”

You’re a massive fan of effects pedals. Have you tried making one?

“I have tried to make my own. I’m not [there yet]. I hope so. I want to learn really bad how to make my own because I know what I would make. But I don’t know how to do that yet. I’m not sure what resistors and transistors and capacitors look like and totally what they do yet. But I am super-interested.”

Talk to us about overdrive and gain.

“Oh yeah! Love it! I love stacking gain pedals, figuring out the perfect blend between two or three of them – it’s like cooking! Y’know? If you have too much of this gain it’s like having too much oregano. I used to be a huge fuzz fan, and I love the sound of fuzz, but at this point I prefer to just stack a bunch of overdrive pedals.”

How did you find your rhythm tone?

“I was looking for the way the strings felt, the vibrations in my hand. I wanted it to feel really good to play, and I wanted it to be really responsive, and so it took a year to find the perfect response from my overdrive, and it ended up being the Fulltone OCD, which is my favourite ever drive. That’s the main pedal that I use. Everything on my pedalboard is affecting that pedal. I am either pushing gain into it or EQing it after.

"The signal chain is a Fulltone 2B boost, so I’ll have the gain all the way up and that gain is pushing into the OCD pedal, and then I’ll have a Klon KTR to add clarity to it – because the pickups in my guitar are a bit dull, but with the clarity on the Klon I’ll bring that up and then I’ll EQ it. I’ll take down the lows a little bit and I’ll boost the mids so it feels good to play, and you can hear it in a band context.”

It must sound really aggressive on its own? Do you dial it back when you are writing or practicing?

“It does, yeah. But I kind of just trained my ear to enjoy that honky midrange, ‘cos this is what I need to sound like live, so I might as well achieve that in my ear and make sure that it sounds that way live.”

“Honestly, I get my tones from my pedals. But on the record I used a bunch of different amps. I used an AC30 and a bunch of different Fender practice amps. I play a 4x10 Fender Concert Reverb. That is my main amp. I love it because its open-backed, 50-watts, and moves a lot of air. And then a DeVille, a Fender DeVille.”

Do you run them clean and just let the pedals handle the dirt?

“Yeah. I like that. Y’know, I wish I could be old-school and have the amp do the work but I just love pedals too much.”

“Volume, yeah! It’s crazy. One of the reasons I love playing with pedals is because I can control the volume, and nowadays sound people always want the stage volume low, so with my Klon I can use it as a master volume. I’ll have the same tone but if they are like, ‘Can you turn it down?’ I’ll just turn it down a little bit and it’ll bring it down but with the same tone.”

You’ve got to keep the sound engineer happy. Have you considered using in-ear monitors?

“Oh, man! I want to. I want to, yeah, just to protect my hearing. But I do love the monitor thing, though, coming back at me. And it does help with the feedback.”

Who is in your pantheon of guitar heroes?

“Guitar heroes? Definitely Stevie Ray Vaughan, Jimmy Page, Jack White, BB King, Albert King, Barney Kessel – who was a jazz player from way back when – and Bonnie Raitt. Let’s see . . . It’s interesting, because guitar heroes are far removed from my songwriting heroes. My songwriting heroes are Motown, Smokey Robinson, and the pop producers of today. Max Martin [Britney Spears, The Backstreet Boys], I think he is a genius when it comes to writing songs, because the lyrics make sense if you read them. They’re hooky. I just love the pop sensibility of his writing. And then Motown, too, the hook is so quick at the top of the song. I guess I love trying to combine that with guitar heroes, because I love both those things so much.”

What’s your writing process like? Do lyrics come first?

You played drums before the guitar. That must give you such an advantage.

“I did, yeah. I think it does. A lot of the way I play has got to do with the kick and snare. Like if the kick and the snare is [plays a riff on an open E] like ka-boom boom ka! It makes it easier to want to explain drum parts to my drummer, because of the drum language. If you are like ka-boom boom ka, ka-boom-boom ka, they understand it! I know where a cue is going to go, too, because I would go there, so I feel like I speak that language. It’s been really helpful for sure.”

Lastly, but all important: what pick gauge do you use?