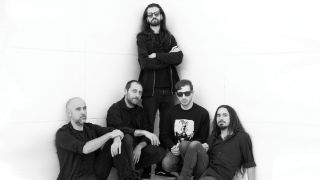 It is May, in the year 2020 and our shortlist of 6 fresh guitar heroes that you have got to hear ASAP is in... Let's do this.

First up, we've got the new project from Opeth bassist Martín Méndez. They are called White Stones, are on Nuclear Blast, and they have a sound that's all their own – quite possibly thanks to the Strat that's all over the record.

Then we've got Gabriella Jones, whose weapon of choice is a Paul Kossoff '59 Les Paul and an ear for a hook, and Manchester hardcore trio Leeched, who are riding that fuzz pedal hard.

There's also the fresh-and-breezy Cleopatrick, the prodigiously talented blues ace Félix Rabin, and the big riffing Atlanta quintet Irist – who, with a Dunable Yeti on the boat and a backline of EVH 5150 III/Marshall JCM 800 amps, aren't lacking in weight.

As the bass player in progressive rock visionaries Opeth, it would be fair to say it’s usually Martín Méndez’s bandmates Mikael Åkerfeldt and Fredrik Åkesson being interviewed for Total Guitar.

That all changes this year with the arrival of Martín’s new death metal project White Stones and their debut album Kuarahy (named after his birthplace in Uruguay), on which he played six-string as well as covering the lower register he’s known for.

“I’ve always written music but never really presented anything to Mikael for Opeth,” says Martín, calling from his Barcelona home.

“This all came from having fun. After writing six songs I felt there was something good there, so I called up some local friends. The singer has been my neighbour for many years and owns the studio I recorded in. The drummer and the live guitarist play in bands around here, so we’ve known each other a while.”

The 10 tracks heard on the debut were originally set for a low-key limited vinyl release, but it was encouragement from Mikael and manager Andy Farrow that swiftly led to a deal with Nuclear Blast.

It wouldn’t have been possible in the past, notes Martín, but Opeth taking a small step back from heavy touring has made it possible to pursue new avenues of creativity.

For the recordings, he stuck to a few basic essentials and dialled in some distinctly organic, yet forceful tones.

“I did the whole album with a stock Fender Stratocaster with original single-coils,” continues Martín, save for the solos which were mostly performed by Åkesson.

“That went through a Mesa/Boogie Rectifier on the orange channel, which has less distortion. I didn’t use much gain, to be honest, it was probably on about three! Effects like delay and reverb were added through plug-ins, so really it was all done with one guitar and one amp.”

After making a name for herself at various events like Wireless, Hard Rock Calling and the Isle Of Wight Festival – as well as supporting megastars like Beyoncé and Bon Jovi – Gabriella Jones has released her latest track 404 via Spotify.

The Birmingham-based singer-songwriter describes her poppy blues as “something simple, but with the power to move people”, and similar things could be said of the band that inspired her most...

“My main guitar hero is Paul Kossoff,” says Gabriella. “That’s why the main guitar I play is a Paul Kossoff 1959 Reissue Les Paul in Lemon Burst. I grew up listening to a lot of Free and loved his vibrato.”

“This generation needs that one riff or hit song which transcends genres and has widespread appeal,” she says – which, we suspect, is precisely what she’ll be working on for the rest of the year.

The 10 tracks that make up Leeched’s second full-length To Dull The Blades Of Your Abuse are undoubtedly some of the most harrowing and disturbing sounds coming out of the UK right now.

Fusing elements of blackened hardcore, death, post- and industrial metal into a powerfully cohesive yet remarkably violent aural assault, the Manchester hellraisers also use feedback as a powerful tool to disorientate their listeners...

“Feedback is the most important,” stresses guitarist Judd Langley, who cites “guitarists who think for themselves” as key influences.

To bring their malevolent noises to the stage, the guitarist says he isn’t particularly fussy: “I tend to use the Way Huge Swollen Pickle Jumbo Fuzz mainly, but generally I’ll rely on whatever can be stamped on extremely hard and not break.”

The Canadian duo are fresh off a tour supporting Frank Carter & The Rattlesnakes and play a brand of dynamic punk-rock with a sense of dynamism and abandon.

Sometimes you only need to people to make a band. Frontman/guitarist Luke Gruntz and drummer Ian Fraser grew up together, have been playing working on this sound since 2015, and have proved themselves more than capable of filling the frequencies that matter. Why is it that duos always sound louder?

A lot of people are starting to pay attention to Félix Rabin's contemporary take on the blues. Some have even dared to venture that he might enjoy a John Mayer-esque breakout with the world's enormodomes waiting to receive him.

Well, we'll see how how that pans out. In the here and now, though, Rabin's tone and feel have seen him share stages with the likes of Samantha Fish, and you should definitely check out his 2018 EP Down Our Roads.

A full-length album might be some ways off but Rabin has another EP, Pogboy, which is available to pre-order now, and is scheduled to be released in late 2020.

Atlanta quintet Irist's debut album, Order Of The Mind, is out now on Nuclear Blast and is essential listening for anyone jonesing for some heavyweight jams and rhythmically complex metal.

Adam Mitchell and Pablo Davila's guitars might be physically imposing, but Irist's sound is one of light and shade, elegiac melodies spacing out the overwhelming crunch of the riff. It just makes it all the heavier.