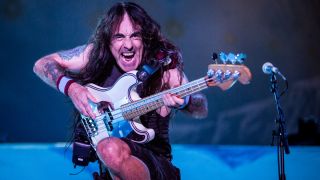 The veteran heavy metallers Iron Maiden are so active, four decades after the London band’s inception, and do so much high-profile touring, that it’s hard to imagine that one of them - and the founder member, no less - would ever have time for a side project.

Nonetheless, that’s what bassist Steve Harris, Maiden’s undisputed leader, has been doing since his band British Lion debuted in 2012 with a self-titled album. Like that record, the band’s new release The Burning is more about straight-ahead rock than the progressive flurries that Maiden fans might have expected from its famously fleet-fingered leader, accompanied by vocalist Richard Taylor, guitarists David Hawkins and Grahame Leslie and drummer Simon Dawson.

There are some melodic passages and chordal moments from Harris, but essentially this is stripped-down music where the arrangements suit the songs - a tried-and-tested approach that the bassist, now 63 but with the energy of a man half his age, values above all else, he explains.

Steve, you always seem to be full of energy and creativity. Is that the way it is in reality?

"I’d like to think so. Obviously you’ve got moments when you’re just knackered or whatever, but you have to allow for those times. I just finished a tour and obviously you need time off, as everyone does, to make it fresh again, but I also know that after a few weeks you just want to get out and do other stuff. I just like to do as much as possible."

The Burning sounds so fresh.

"I think this is a real step up from the first album. Obviously it’s been a decent amount of time since the first album. came out. Seven years later it’s like, how the hell did that happen? Obviously we’ve done quite a bit of touring as well this year. Maiden always has to come first and they always will, so what do you do? You’ve got to try and cram stuff in the best you can."

Have you split the songwriting on this album, like you did with the first one?

"Yeah, it’s pretty much the same. Most of the stuff is between the three of us, David Hawkins, Richard Taylor, and myself. There’s one song that’s me and Richard, and there’s an older song which is between four people, but it’s pretty much or even a year without doing a tour because of commitments with Maiden and everything else, so when we do get together, everyone’s dying to get out there and play. There’s a lot of energy. We’re having a lot of fun."

Does the bass occupy a different position in British Lion to that of Maiden?

"It did to start with. The first album was a bit of a strange thing, really. I was trying to experiment and do a few things, but since I’ve been playing live with them so much, I’ve basically gone back to using the old faithful sound, which is more me, anyway."

Tech 21 have just sent us the new Steve Harris SansAmp.

"Oh yeah! I can’t believe how good it is. I literally couldn’t believe it when I first heard it. The guy at Tech 21 sent me this unit and he’d done a couple of special mods on it for me to try and recreate my EV speaker sound.

"When we were playing in Canada with Coney Hatch, their bassist Andy Curran’s a good mate of mine, and he uses an Ampeg rig, which is probably as far away from my sound as you can get. So I thought, ‘Let’s try it’ [through the Ampeg], and I couldn’t believe how close it was to the sound going through it. I thought, ‘Wow, if it works through that…’

"I just couldn’t believe it. It was a miracle moment, and miracle moments don’t often happen. I said, ‘I’m totally happy to put my name to this, because this really works and I’m really going to use it’. I’ve discussed similar things in the past, but if I’m not really happy with something or don’t feel like I’m going to use it, there’s no point in putting my name to it. But this really does what it says it’s going to do."

So you know you can plug it in and get the sound you want?

"Well, that’s the thing. One of the reasons why I started down that road, to a certain degree, was because with British Lion there’s a certain budget - and I can’t transport amps everywhere. Orange have been brilliant as well, helping me out with stuff, so I’ve got a couple of rigs in different parts of the world.

"But in parts of the world where I can’t take anything with me, the SansAmp is incredible because you can pack it in your carry-on bag. I’m not a salesman; it’s not like that at all. It’s just actually nice when something does what it’s supposed to do."

You told us a few years ago that when you record bass, you like to use the edge of your fingernail to get that top end. Is that still the case?

"Yeah, it’s still the case. I’m very lucky that they don’t split. Every now and then I might get a little chip in my nails, but I just trim them down a little bit. I try not to hit the strings too hard, but at some places you just end up getting excited, or the sound isn’t as good and you overcompensate as you do, and that’s what happens. But I try not to let that happen to me."

Do you get stage fright anymore?

"I don’t really get it much these days. If I do get it, it would probably be with British Lion, maybe at the beginning of a tour, if you’re doing a new album. We’ll have rehearsed it enough, but it’s not the same as going out there and playing it, so you might be a little bit edgy. The key is just being confident and rehearsing enough, but sometimes with British Lion, it’s just not possible."

Is that simply down to everyone having different schedules?

"Yes. In fact, I did that with one tour. I finished a tour with Maiden, rehearsed the next day with them for one day, and then went out on tour. But that doesn’t mean it’s unprofessional, it just means that they’re more rehearsed than I am. I rehearse on my own and it still works, but it’s not ideal, is it? I would prefer to rehearse together, but there’s physically not the time.

"It hasn’t really made any difference. I don’t think people notice. It’s not like I’m making mistakes or anything like that. I’ve gone out there and maybe not been as confident as I would be, but you’ve just got to go for it, really. It’s a challenge and it gives you an edge, definitely."

You’ve said that it’s nice to play a small club from time to time.

"Yeah, I love playing small clubs. I’m very lucky that I can play all types of gigs; massive gigs and small ones as well. It’s a change. I’m not trying to conquer the world with this band; there’s not enough years left in me to do that anyway."

Different venues just present a different set of challenges, then?

"I actually think it should be the same, whether you’re playing for 200 or 200,000 people, you know. To me, there’s no difference. You still give 110 per cent wherever you’re playing. We had one gig where the promoter just didn’t do [anything]. I think we had, like, 95 people in there, but it was still a great gig, one of the best of the tour. It doesn’t matter. We’re still going for it, and I was proud that we went out there. It was fantastic."

Are you playing bass differently these days to the way you were when you were younger?

"Maybe. I’m not playing as busy as I was in the early days, because when we started off there were long periods of time where there was only one guitar - and not by choice, a lot of the time - so you try to fill in and make up the space a little bit. There was an element of that going on.

"Now, in Maiden we’ve got three guitar players, so it’s just a case of trying to fit in between them. It depends on the song, really. I’m playing less than I was years ago, but that’s because of the songs: I do what the song needs. I try not to underplay or overplay. I just do whatever feels right. It’s all about the song, always has been for me."

Is the big picture that there’s nothing left to prove with the big band, and you don’t need to prove anything with the small band?

"I don’t know, really. I suppose there’s always something to prove, really, even if it’s proving to yourself that you can still cut it. There’s an element of that. But people either like it or they don’t. That’s always been the attitude, and it still is!"

British Lion's new album, The Burning, is out now via Explorer 1 Music.