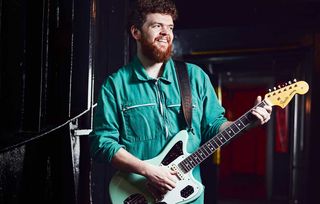 Jack Garratt: “The Strat was the one instrument that I could use to create a tone that was my own” (Image credit: Future / Jesse Wild)

Jack Garratt might have been weaned on Stevie Ray Vaughan’s heroic blues, but he is the sort of player who eschews fretboard pyrotechnics.

Maybe that’s because with synth and drums, trombone and piano, Garratt has enough going on, but it makes him an unconventional guitar hero. He would probably resist the term, but he’s surely okay with being unconventional; it is what makes his sound his.

After a hiatus, Garratt is returning with his much-anticipated sophomore record, Love, Death & Dancing, a record that sees his one-man polymath approach to songwriting write large across two volumes of music. While he was in Bristol for an intimate set at Thekla, he took a bit of time out to talk songwriting and where his guitar fits in.

He’s worth listening to, because his control over his sound seems so assured. If he finds he is over-playing when trying to write a song, he’s not afraid to switch it up and write on piano instead.

Having recorded his debut, Phase, in 15 days, DI’ing his guitar, creating drum patterns on synth keys, creating the illusion of room space digitally, Love, Death & Dancing was afforded the luxury of a more organic recording environment.

And it sees him fall back in love with his guitar after a period in which it felt more an adversary than friend.

What draws you to the Fender Stratocaster?

“For me, it has always been a tone-driven thing, and the thing about Stevie Ray Vaughan’s tone is you could play a Fender Strat and it would sound nothing like him. The guitar wasn’t the tone.

“The Strat for me was the one instrument that I could use to create a tone that was my own. [Pauses] I ended up mimicking his sound for about five years!”

What do you look for in an amp?

“I am a big fan of restrictions. The reason why my pedalboard isn’t massive, the reason why I mostly play Strats, is that I much prefer challenging myself to create stories with limited resources, and the Rockerverb has a treble knob and a bass knob, and that’s it.

“It has got reverb and tremolo on it, I think, but then the thing that caught my eye was it had the attenuator at the end of it. I needed something that still gave me some bite and gave me something to play off that wasn’t overpowering the whole sound onstage.

“It having an attenuator gave me a girthy sound, mixed in with me playing on .011, .012 gauges [strings], playing on a rosewood fretboard, playing with a Tube Screamer – [it's] everything I love about guitar tone.”

“It has got proper dirt on its bones and what I was looking for was something that would give me little kicks of presence now and then. Using the front pickup on my Strat you can get nice and warm and comfortable, and knowing that all you need is a flick to the back pickup to light everything up.

“That was a big thing that Stevie did. You never saw him down on the floor, twiddling; he was just pickup and volume, and I fucking love that. The Rockerverb I loved for that. It was really responsive.”

What amp have you got today?

“Fender Twin, but it’s the digital one [Tone Master]. I might get a lot of flak for it, but I don’t care; it sounds fucking wicked. It’s insane. I have had a lot of guitar heads coming to the meet-and-greets after and saying the guitar tone is really good. It’s incredible, and my crew bloody love it.”

How do you find the digital amp’s response?

“It’s feeding into what the Tube Screamer is already doing, which is, when it’s fingerstyle it’s nice and soft, but the minute I get a pick out and I dig in to the strings it roars, because it has just got this headroom. I depend so much on my fingers doing the work rather than the pedalboard.”

What do you get out of pedals?

“I need stomp pedals to help with dynamics. That’s why the Tube Screamer is so important to me, because that is my base-level tone. I don’t play acoustic guitars. I think there are enough white men in the world with acoustic guitars singing sad love songs. I don’t particularly want to be one of them.

“There is a song called Weathered that is just me and the guitar, and the setup I have for it is just a Strat, middle pickup, Tube Screamer on, and reverb activated.

“I have the Tube Screamer on a hot setting and have the tone pretty much all the way up, the level all the way up, and the gain down, and what that gives me is a ‘clean’ tone that’s got some warmth and some buzz.”

What else is on your ‘board?

“I’ve got the Boss Super Octave, which is there for some solo moments. It’s fun to whack that on and kick it up a notch. That is used on the solo I do on Worry. For additional gain and presence – essentially as a tone booster – I have got the Moog Minifooger filter pedal. It has drive and tone, and I am essentially just using it as a boost pedal for big solos. That’s for the end of Worry and one of my new songs called Mara.

“My favourite thing I have on there at the moment is a [EHX] Hum Debugger. Because of the way it works it ends up giving me this really short slapback effect. I don’t have any delay pedals on the board and having that on is just an additional piece of something. And it gives a bit of loss at the top, a little less information at the top end.

“On top of that, I have an Orange pedal – I think it’s called the Kongpressor. Sometimes I will take it off when I need a bit more dynamic range but I will whack it on when I am going for a wall of sound.”

How would you describe your music to someone who hasn’t hear it?

“It is tough to do that because I would describe it as ‘me’. There also wasn’t a single song that I could offer someone and say, ‘This is the best example of my music.’ I like to compete with myself, to make different. The best way to describe my music is that it is an amalgamation of everything I have listened to.

“I am a sponge. The things I listened to when I was seven are still leaking into the music I am making today, and I am not aware of it, which is good. If I become too aware of someone else’s music in my music it’s not my music; it’s someone else’s.”

Are you more comfortable fingerstyle or flatpicking?

“They both create such different worlds. I use both a lot. When I was 16, I listened to Tommy Emmanuel and that is all I wanted to do, but then I started listening to Paul Simon and Jackson Browne, some Americana stuff, and noticed that fingerstyle can lend itself to a more songwriting place rather than spanking about on the strings and getting all the harmonics in.

“Paul Simon is an incredible fingerstyle guitarist but you wouldn’t know it because you are not supposed to; he is playing the guitar for his songs. I love it when it’s used right. Same with the pick. You can use both of them at the same time. I have always got a pick in my hands even if I know the song is just played with my fingers, just in case I have a moment where I need that chord to sing out.”

How long have you had your Jaguar?

“Just for this tour. I’ve played around with a couple of Jags looking for different tones and none of them made it onto the record, but I knew when I was going out – especially for Mara – I needed something that was going to give me something slightly different. The Jaguar has been brilliant for that and I have got it in open C#. It is absolutely gorgeous.”

How do you approach switching between instruments?

“What’s fun is that, when I am in rehearsals, I have no idea. I’ll try things out and see. It’s trying to find the right moments to utilise those instruments without it feeling forced...

“Mara is a song that I just play guitar on and I have all these synths behind me that we are sending MIDI information to, so they are playing the rest of the song for me. They are essentially the limbs that I do not have. I’ve got two drum machines behind me and a couple of modifying synths.”

Is this an act that is prone to complete disaster if everything doesn’t go right?

“Yeah, it absolutely is. I had a lovely comment from someone at a meet-and-greet saying that if that wasn’t present in the show it wouldn’t be a Jack Garratt show.

“It really touched me when he said that, because my theory about shows is that there’s nothing that says the audience shouldn’t be as exhausted as I am when I walk off stage. I think part of that comes with the stress of not knowing whether it’s going to work.”

What do you see for your future with the guitar?

“I have no idea! For me, it has become such an inspiring friend and necessary confidante. Doing this show, which is a way more intimate show, I get to sit down.

“Mara is my favourite song to play because I have never in my life just sat down and played guitar in front of people before. It’s interesting, intricate, and it forces me to play the guitar well. That is what the guitar is for me – a litmus test of how I am feeling.”