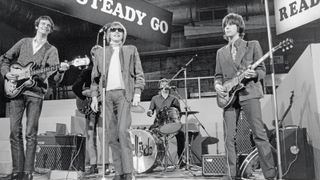 The only true constant throughout Jeff Beck’s oeuvre has been progression. The man never stuck around while an idea’s shelf-life faded - and like any good craftsman, he’s always sought specific tools for specific jobs.

It’s easy to mark the distinct periods of his career by which gear he was using. Here, we take an era-by-era look at the equipment and tonal recipes that assisted a true master of the guitar in crafting his masterpieces.

During his tenure with the Yardbirds, Beck used the famed blonde ’54 Fender Esquire with a shaved bass bout. Beck bought this guitar from John Walker of the Walker Bros in the mid Sixties and (regretfully) traded it to Seymour Duncan for a heavily modified Fender Telecaster.

Beck has said over the years that he ran Vox AC30s in the studio with the Yardbirds, and a key part of his sound during this period was a Tone Bender MK I.

Beck had switched to a sunburst ’59 Gibson Les Paul Standard toward the end of his time with the Yardbirds, and that guitar was used for the majority of Truth and some of Beck-Ola - though much of the latter album was done with a stripped Fifties Fender Strat.

The Strat tracks are easy to pick out as they marked the rebirth of Beck as the King of Whammy Bar Theatrics. Beck had switched to Marshall Super Leads by this point, aided by a wah pedal and a mysterious boost pedal that’s often discussed by Beck gear cognoscenti. The early Seventies saw him pick up the iconic modified oxblood ’54 Gibson Les Paul that graces the cover of Blow by Blow.

For one of the most prolific whammy bar fiends of all time, the locking tremolo was indeed an intriguing device. Beck had taken to a pair of custom Jackson Soloists in the mid Eighties around the recording of the Nile Rodgers’-produced Flash.

Loaded with true single coil pickups, Beck’s pink Jackson oddly sported a Kahler trem while his orange one rocked a Floyd Rose. Beck used (and appeared in ads for) Seymour Duncan’s Convertible amps around this time - although he used the Duncans alongside his tried-and-true old Marshalls.

For those interested in Beck’s off-kilter Jacksons, the brand has recently reissued an affordable version of the orange guitar known as the SL4x - complete with neck-thru construction.

In the early '90s, Beck received his first Fender signature Strat, and those guitars have provided him with a home base ever since. While the signature model has gone through various iterations of pickups, including Lace Sensors and Fender Noiseless single coils, it’s always included a rosewood fingerboard and a chunky neck.

Beck continues to use Marshalls, specifically a JCM2000 that supposedly shares very little circuitry with retail models and that he boosts with a Klon Centaur. The man has also enjoyed a flirtation employing a pair of dimed Fender Pro Jr. amps, and let's not forget his trusty Magnatone models.