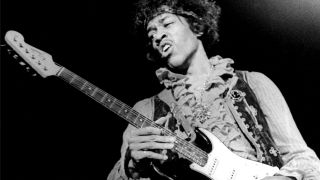 The greatest player to ever have picked up an electric guitar? Surely.

Jimi Hendrix was a man whose sound was rooted in blues but seemingly refracted through the cosmos and the psychedelic feedback loop of the Swinging Sixties. His style is a lost art. Hendrix used volumes in ways that were unique to him and prohibited by the practicalities of modern stages, sound limits, etc.

Who knows what Hendrix would have come up with if he was still with us. Thinking of Jimi as an elementary player, perhaps his earth, wind and fire would be the Fender Stratocaster, Marshall stack and wah/uni-vibe.

There is a massive industry in creating gear that puts some of that magic at your fingertips. Sure, we can buy these. That’s the easy part. The rest is brain and fingers.

In the mind’s eye, Hendrix will always be Strat in hand, but he played all kinds of guitars. When he was a session player for the Isley Brothers he played a blonde Fender Duo-Sonic.

When he played with Little Richard he used a Jazzmaster, proving, perhaps beyond doubt, that off-sets have always been cool and everyone should chill out. He also had a variety of Gibson Flying Vs, an SG Custom, a Silvertone-era U-1 Danelectro with a Shorthorn body.

According to Jimi Hendrix Gear by Harry Shapiro, Michael Heatley, Roger Mayer, he traded his U-1 for an Epiphone Wilshire. And sure, he used the odd acoustic, notably a Martin D-45 and an Epiphone FT-79, but for our purposes we’re going to stay electric, and stick with the Strat, the Flying V, and OK, one SG because we really need an affordable option for a vibrola.

Fender Custom Shop Jimi Hendrix Stratocaster in Olympic White
Nicknamed Izabella, this was the Woodstock Strat, the Star Spangled Banner Strat, a 1968 Strat modded for Hendrix with a strap button on the lower horn, with a stripeless maple neck carved into an oval C-profile.
This is the one. As part of Fender’s Custom Shop Tribute Series, the detail with which it is replicated is forensic. There are only 250 pieces worldwide, so best get that deposit down now.

Gibson Custom 1967 Flying V with Maestro Vibrola in Antique Natural
A meticulous Custom Shop recreation of a ’67 V, this will let you recreate that Hendrix-with-V experience as witnessed on blazing sets such as the 1970 Isle of Wight Festival.
With its Maestro Vibrola, medium C profile neck with long tenon, Kluson tuners and Custombucker Alnico III pickups, this is total vintage power. One to dig out for jamming Red House or Dolly Dagger. It always seemed to be on those tunes that he broke out the Gibsons.

Fender Jimi Hendrix Stratocaster in Olympic White
The production line signature Strat has an alder body, bolt-on maple neck and fretboard, a slightly flatter 9.5” fretboard radius rather than the chokably old-school 7.25” Jimi would have played, but the tone is excellent for the money. It looks cool, too, with right-handed versions boasting a reverse 70s-style Strat headstocks. It has three American Vintage ’65 single coils, with the bridge pickup mounted on a reverse slant for a warmer tone.
Want to mod this? What about a set of Seymour Duncan’s signature Hendrix pickups? $279 will change this guitar’s voice and give it more of a Hendrix ’68 tone.

Epiphone SG Standard '61 Maestro Vibrola in Vintage Cherry
Sadly, Epiphone doesn’t yet have a Flying V with a Maestro but its new Inspired by Gibson collection has a really sweet SG with a Maestro that would be just the thing for the aforementioned Red House jam. Featuring PAF-like ProBuckers with Alnico II magnets, with the bridge ‘bucker wound a bit hotter, this is a rock machine.

Marshall by name, Marshall by nature. Sure, Hendrix used all kinds of amps, Bassmans, Twins, Supro Thunderbolts, Sunn 100s, but it was Marshall’s 100-watt Super Lead that he would become synonymous with, cranking it hard and using his guitar to tame the madness when needed. The volume was crucial, and the full-stacks helped create the environment in which his alchemy could take effect.

Marshall 1959HW Handwired Plexi Head with full stack
If you do buy one and gig it in the style of Jimi Hendrix please do send in a photo of the sound engineer’s face after you’ve dimed this. A quartet of EL34 tubes are housed in the power section, with a trio of ECC83s sitting in the preamp.
With a boutique ’67 reissue such as this, it would be rude indeed not to partner it with the ’67 Flying V and let nature take its course. The matching angled and straight extension cabinets will make sure you squeeze everything you need from it.

Marshall Studio Vintage 20W 1x10 combo
If you are worried the full stack and 100-watt head might cause ear and wallet trouble, and by all rights you should, this small combo format of the 1959SLP should hit all the right notes. Great for blues, great for rock, it is a single-channel, no-fuss set-up. It has a three-band EQ and you can patch the inputs for more tonal options.

Marshall Origin 5C 5-watt tube combo
For some Hendrix at home flavor, the Origin should do the job. At just 5-watts, there’s still plenty of volume, but it should be a little more manageable. The TILT blend control gives you more control over your treble, while the three-band EQ and boost and presence will help you find plenty of classic Marshall tones.
If the 5-watts aren’t enough, or rather, if the 8” speaker sounds a little dinky to your ears, you could always scale up with the 20- or 50-watt versions. $699 would get you the 50-watt combo with a 12” Celestion G12N-60 Midnight.

Volume and its volatile effect on single coil guitar pickups was probably Hendrix’s most potent effect, but he also deployed a cornucopia of fuzzes, octave fuzzes, wah, uni-vibe and Leslie effects. So let’s run through some that could definitely do a job on your pedalboard.

Roger Mayer Octavia Classic fuzz
Roger Mayer’s name is written into rock’s storied history for his pioneering with work with effects. This analog fuzz is his most-famous stompbox, has been cloned countlessly, and dates back to ’67.
Its circuit is a strange brew - a frequency doubler, envelope generator and amplitude modulator with addition frequency shaping filter. Its dynamic, unruly if you want it to be, and, darn it, it’s really expensive.

Hammond Leslie 002-Leslie modulation pedal
If you want to spirit the audience off into a world of head-spinning bliss you’ll need a rotary speaker effect, and this one has all the dizzying swirl you’ll ever want. It is also hugely tweakable so there is a heap of tone to explore.

Dunlop MC404 Custom Audio Electronics wah
If you are serious about your wah game you are going to want the best, and this, designed with Bob Bradshaw, is quite possibly the finest you can get. At that price, it represents excellent value, too. You can tweak the ouput, the sweep, and there are two modes and onboard MXR MC-401 Boost/LineDriver.

Fulltone OF-2 Octafuzz
A clone of the Tycobrahe Octavia, which itself was a clone of Mayer’s early 24V Octavia, this has an abundance of octave-up harmonic overtones, the sort of effervescent dirt and fizz that Hendrix got plenty of mileage out of. It has the heavy-duty construction you’d expect from Fulltone and is made in the USA.

Dunlop JHF1 Jimi Hendrix Fuzz Face Pedal
If we’re going to do this right we are going to need something round, with a hand-wired circuit board, and with a BC108 silicon transistor to help recreate the kind of gnarly fuzz tones Hendrix got from his Dallas-Arbiter fuzz in the late ‘60s.

Dunlop JHW1 Jimi Hendrix Signature Fuzz Face Mini Pedal
If you really can’t decide between the aggressive silicon sounds and the softer germanium dirt, you could always plump for this, which houses both in this custom-graphic enclosure. Besides, this takes up hardly any space on your ‘board.

TC Electronic Vibraclone
This might not be as transformative or as versatile as the Leslie but it is only 70 bucks and will give you a nice bit of movement in your tone.

MXR Uni-Vibe M68
The MXR Chorus/Vibrato is often likened to a Leslie tone. Side by side they are quite different but if money was tight you could forego the Leslie in favor of this beautiful warble. The MXR Uni-Vibe is excellent value and a hugely musical effect.